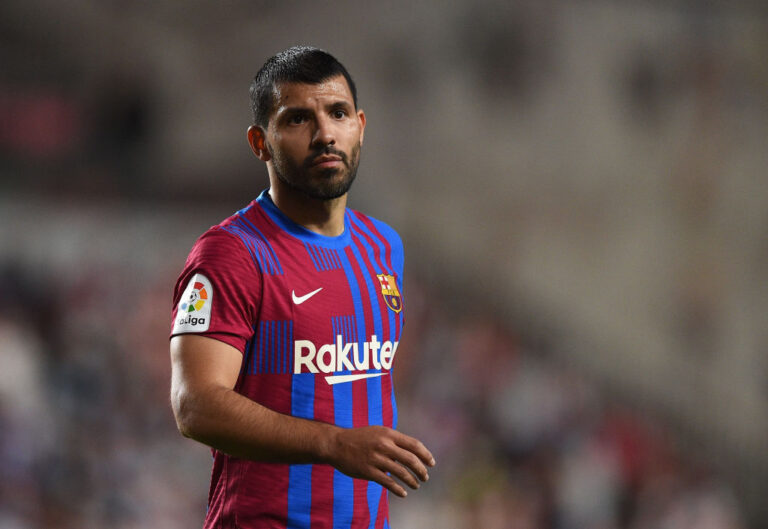 Sergio Aguero has just announced his retirement from professional football. The Argentinian legend has left an astonishing legacy. Now, he can take a step back and enjoy the net worth that he has accumulated throughout his career.

The devastated 33-year-old wiped away the tears as he announced his decision today at a press conference in Barcelona.

He cried: “This press conference is to communicate that I’ve decided to stop playing soccer. It’s a very hard moment, but I’m at peace with my decision.”

“I made it to preserve my health. It’s what the doctors said to me, that it would be better to stop playing. I made the decision around ten days ago.”

“I’m very proud of my career. It was a dream come true. I just wanted to be a professional player and never thought I would play in Europe.”

During a fixture against Alaves at the Nou Camp earlier this month, the Argentinian was rushed to hospital. He was experiencing chest discomfort and breathing issues, which were ultimately diagnosed as symptoms of arrhythmia.

The news has crushed Aguero, but when enough time passes, hopefully, he’ll be able to look back on his astonishing career with pride.

Let’s take a stroll down memory lane and reminisce about his best achievements.

During his time at Manchester City, Aguero became a legend at the Etihad. His outstanding performances contributed to his former club winning the Premier League five times. Furthermore, his stunning goal tally made him the fourth-highest scorer in the division’s history.

He also won an FA Cup and six Carabao Cups. However, his most incredible moment came in the dying seconds of the biggest game in the club’s history.

The last day of the 2011/12 season had more twists and turns than most campaigns combined. Manchester United had the league title within their grasp after a 1-0 win against Sunderland.

It looked like City had let their first Premier League title slip out of their hands. They were 2-1 down against QPR, with only a few minutes of stoppage time left to play. Roberto Mancini’s side needed a win to secure their first top division championship in 44 years.

Then suddenly, Edin Dzeko levelled the score and gave the home fans a massive burst of energy. City began to press, desperately searching for the big goal. Then suddenly, it comes.

“Agueeeeroooooooo”, screams Martin Tyler down the Sky commentary microphone. “I swear you’ll never see anything like this ever again.”

The fantastic punditry summarised one of the most memorable Premier League moments of all time. Aguero had done it. He had created history.

After receiving the ball inside the penalty area from Mario Balotelli, he hammered it beyond a helpless Paddy Kenny.

Sergio Aguero scored 41 goals in 101 matches during his impressive tenure as one of the key players in the Argentinan national side.

He represented them at three separate World Cups and enhanced his already remarkable legacy by helping them win the Copa America earlier this year.

The all-time Premier League great may never set foot on the pitch again, but that doesn’t mean he’ll be short of cash. The forward can put his feet up and relax after earning more money than most players could ever dream of pocketing.

According to Celebrity Net Worth, The Buenos Aires native is worth a staggering $80 million. But could we expect one of the greatest players of our generation to have earned any less?

His agility, rapid speed and innate ability to place himself in the perfect position all contributed to his fantastic goalscoring ability.

Therefore, every club in Europe wanted him to feature in their team. This stature allowed him to demand a yearly salary of $23.5 million during the latter half of his career. This figure was likely comprised of his club salary and endorsement deals.

The Argentinian may potentially never play football again, but fans all over the globe will never forget what an incredible player he was.

And having amassed a humongous net worth, Sergio Aguero can sit back, relax and enjoy the rest of his life as a very wealthy man.