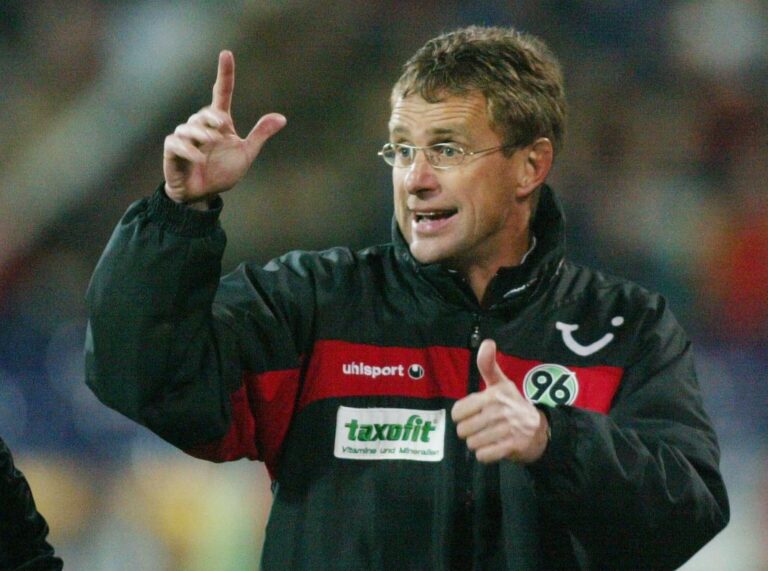 Long before his appointment as Manchester United interim manager, Ralf Rangnick has been a football revolutionary.

His style of play influenced the likes of Liverpool manager Jurgen Klopp. When Rangnick’s Hoffenheim beat Klopp’s Borussia Dortmund back in 2008, the Premier League-winning boss told his opponent that the winning style was exactly how he wanted his side to play.

In a 38-year coaching career, Rangnick has earned plenty of admiration. He is widely known as ‘Professor’ in Germany, such is his studious approach to the game.

We’re going to head back to 1998 to look at one example of how the German coach put his philosophy into the public domain. Ralf Rangnick took part in an interview with SportsStudio about how he played the game. He was asked for his thoughts on why more teams didn’t adopt the same approach.

Twenty-three years on, it’s clear to see that other teams eventually caught up.

Picture the scene – a studio, complete with a tactics board, some reasonably bright graphics and a few CRT TVs. That’s what was in the room when Rangnick revealed all about his style back in December 1998.

At this time, the German coach was in charge of Ulm 1846. He had recently guided them to promotion to the 2. Bundesliga. He signed a deal to coach Bundesliga outfit VfB Stuttgart a few months later.

In the interview, Rangnick talks about pressing and how he feels it should be done. The idea comes as second nature to most of us now as one of the dominant ways to play football. Back then, however, it was a relatively new phenomenon.

The interview itself is in German – so for non-German speakers, make sure to click that ‘auto-translate’ button.

Rangnick explains: “For us, the back four is actually just a means to an end, because what we actually want to play is extremely pronounced pressing.

“It is simply important that the players also have a basic order where they know that every player is really covered.

“The opposing player has the ball. First of all, what we call the one who almost plays the number 11, is required to move in the direction of [the player on the ball], and the number eight has to be here regardless of whether the [opposing] number two is covered. The number 10 then pushes towards the [far] side. They have the task to create a project to close off the pass.”

What eventually occurs is a scenario where every player is in one half of the pitch when the opponent has the ball. Rangnick explains how this happens.

“When we want to generate an outnumbered player, we have to be outnumbered somewhere else on the pitch,” he says.

“The number nine slides in the direction of [the ball]. The number seven, depending on where the opposing players are now, moves into the middle again. So when this situation is over, we actually don’t have a player of our own in [the other] half of the playing field.”

How has Rangnick put his ideas into practice at Manchester United?

Ralf Rangnick has only been in charge of Manchester United for two Premier League games. However, we’ve already seen changes to the side’s style of play.

According to Sky Sports, Rangnick’s side have outperformed their season average when it comes to tackles and duels won. The most marked impact is on possession won in the final third – a crucial part of his philosophy. United have won the ball back 12 times per game on average, compared to 4.1 combined under Ole Gunnar Solskjaer and Michael Carrick.

The players have run less and completed fewer sprints, but it is clear to see the areas of improvement that the new interim manager has prioritised.