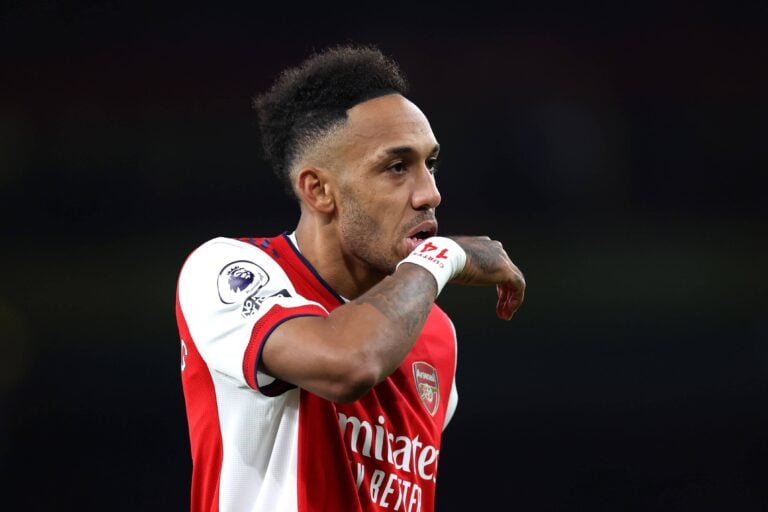 Arsenal forward Pierre-Emerick Aubameyang has been stripped of the club captaincy.

The Gabonese international held the role since November 2019. He was appointed after the Gunners took the captain’s armband away from Granit Xhaka a month earlier.

Announcing the news on their official website, Arsenal stated: “Following his latest disciplinary breach last week, Pierre-Emerick Aubameyang will no longer be our club captain, and will not be considered for selection for Wednesday’s match against West Ham United.”

“We expect all our players, particularly our captain, to work to the rules and standards we have all set and agreed. We are fully focused on tomorrow’s match.”

Let’s look at the disciplinary breach in more detail. We’ll also view the chain of events that led to Aubameyang losing the captaincy:

Aubameyang spoke of his pride after being named the club’s permanent club captain back in 2019.

The striker had been at the Emirates Stadium for over three years by this point. The decision was made just days before the departure of Unai Emery, with Arsenal in a seven-match winless run.

Aubameyang said: “Arsenal has a great history of wonderful captains like Patrick Vieira and Tony Adams. It’s a privilege to follow in their footsteps, and I will honour the armband by doing my very best on and off the pitch.”

By August 2020, things couldn’t have been going much better for Aubameyang. He was captain as his side to the 2019/20 FA Cup final.

In the final against Chelsea, the Gabonese forward scored a superb brace, guiding his side to a 2-1 victory. He was the man of the match.

Shortly afterwards, Aubameyang signed a new three-year contract with Arsenal. Coming off the back of a season where he netted 29 goals in all competitions, the future was looking bright for player and club.

Manager Mikel Arteta dropped a bombshell before the North London derby against Tottenham Hotspur in March 2021. Aubameyang would not be playing.

Arteta confirmed after the match against Spurs that the club captain had turned up late to training. The Spaniard dropped him as a result. A month earlier, the striker had been reprimanded for a Covid-19 regulation breach.

Arteta said (quotes via Eurosport): “We have a way of leaving together that we have to respect each other and that is it. But he is an incredible guy and he is one of the most important players in our team, he is our captain and we move forward.”

Thankfully for Gunners fans, they could still secure victory without Aubameyang in the team. They won 2-1, despite going behind to Erik Lamela’s superb rabona goal.

Aubameyang was dropped from the Arsenal squad altogether for their Premier League fixture against Southampton on Saturday.

Arteta revealed after the game that it was again because of a disciplinary breach. He would refuse to go into any more details.

The Athletic later reported that the club had given Aubameyang permission to fly to France to bring his mother back to England. The condition was that the Gabonese forward left on Wednesday and returned that same night.

However, the 32-year-old did not return on the same night, and instead flew back to London on Thursday morning. The club then told him to train at home on Friday.

Pierre-Emerick Aubameyang has now had the captaincy removed. The disciplinary debacle was clearly the final straw for Arteta and the club.

Speaking to the media on Tuesday, the Gunners boss was unequivocal in his message. He would also explain that he told Aubameyang about the decision face-to-face.

He stated: “I think it’s a real clear statement from the club. It’s a decision we have made following the last incident that we had with the players and this is where we stand.”

“When we had to make that decision, it was the right one to defend the interests of the football club.”

Who could be the next Arsenal captain?

After the removal of Pierre-Emerick Aubameyang from the role, attention will now turn to who will be the next Arsenal captain.

There are surely several contenders. Alexandre Lacazette was the player chosen to wear the captain’s armband for the win over Southampton. Rob Holding, meanwhile, was named skipper for the Carabao Cup round four win over Leeds in October. However, the centre-back isn’t a first-team regular.

Kieran Tierney could be another option. He was named captain of Celtic in the summer of 2017, and held the role until he left the club to join Arsenal two years later. The Scot has recently returned from injury and is looking to re-establish himself as the first choice at left-back.

On the importance of the choice, Arteta said: “It’s really important but for me, having the leadership group is something that has been tremendously helpful because then you get different voices.”

“It is a really multicultural dressing room that needs a lot of attention and different feelings and different languages. They all have to be involved, and I’m comfortable with that.”