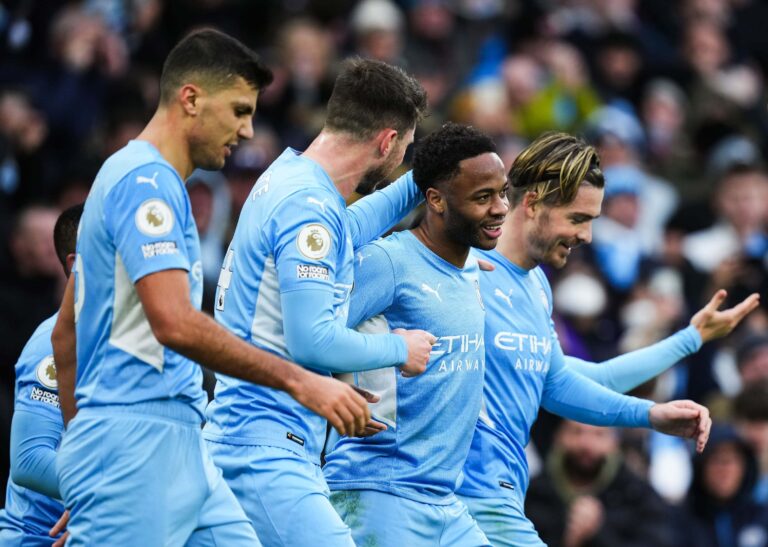 This season, Manchester City, Liverpool, and Chelsea appear to be involved in a three-way battle for the Premier League title.

City currently lead the way, having accumulated 38 points from their 16 games so far this season. However, their rivals are close behind. Liverpool are in second on 37 points, whilst Chelsea sit third on 36.

The Citizens have won their last six games. Looking back to last season, when they won 21 games in a row in all competitions, that could be a chilling forebodement for other sides when it comes to what they could achieve this season.

Liverpool, meanwhile, are also in strong form. They’ve won each of their last five league games. The outlier in this area is Chelsea. Thomas Tuchel‘s side have won three of their previous six games, drawing two and losing one.

It is interesting to compare how City, Liverpool and Chelsea have performed against different sections of the Premier League table. A chart posted on Reddit has shown precisely that. Let’s take a look:

All three teams have played five games against the top six sides in the division – those teams being themselves, West Ham, Manchester United and Arsenal.

In terms of results, the discrepancies between the top three are certainly remarkable. City lead in this area, having accumulated 2.6 points per game against their top six rivals. Liverpool, meanwhile, have recorded 1.6 points per game.

It is clear to see that matches against the top six have been Chelsea’s real weakness this season. They have recorded just 1.0 points per game against those sides, winning just one of their five matches. That victory came in their 2-0 win over Arsenal back in August.

Since then, Thomas Tuchel’s side have suffered defeats to both City and West Ham, as well as drawing against Liverpool and Manchester United.

When it comes to goals scored, the Reds are the leaders. They average 2.8 goals per game against members of the big six.

Out of the three teams, City lead when it comes to the fewest goals conceded (0.6 p/g) and goal difference (1.8 p/g). Once again, Chelsea rank lowest in all three statistics, although they are level with Liverpool (1.2 p/g) for goals conceded.

Performances against the ‘middle eight’

Another key metric for Premier League title winners is not just how they perform against the top sides, but also against those in mid-table.

It is a common adage that the English top-flight is one of the most competitive leagues globally. Any team can beat another if they perform to their maximum potential on any given day.

That hasn’t been the case for mid-table teams facing off against Chelsea this season. Tuchel’s side have a 100% record against the ‘middle eight’ in this season’s Premier League table.

The Blues average 2.8 goals per game against those opponents. Remarkably, they also haven’t conceded a single goal in those five matches. That is testament to how solid Chelsea’s defence has been overall this season – and how it could play a crucial part in their title challenge.

Liverpool are also unbeaten against ‘middle eight’ opponents, although they have recorded two draws from their six matches.

City are surprisingly the outliers in this statistic. Guardiola’s side have lost two of their seven games against mid-table sides, namely their defeats to Tottenham and Crystal Palace. They are the only two games they have lost in the league this season.

Performances against the ‘bottom six’

As you would expect, all three title challengers have near-perfect results against the bottom six sides in the Premier League table.

Jurgen Klopp’s side have a 100% record, winning all five of their games against the league’s lowest-ranked sides. They average 3.4 goals per game and are yet to concede a single goal against those sides.

Chelsea have faced off against the bottom six sides on six occasions, winning five of them. They were held to a 1-1 draw by Burnley back in October.

City, meanwhile, have three wins from four games, dropping two points as a result of a 0-0 draw with Southampton at the Etihad Stadium.