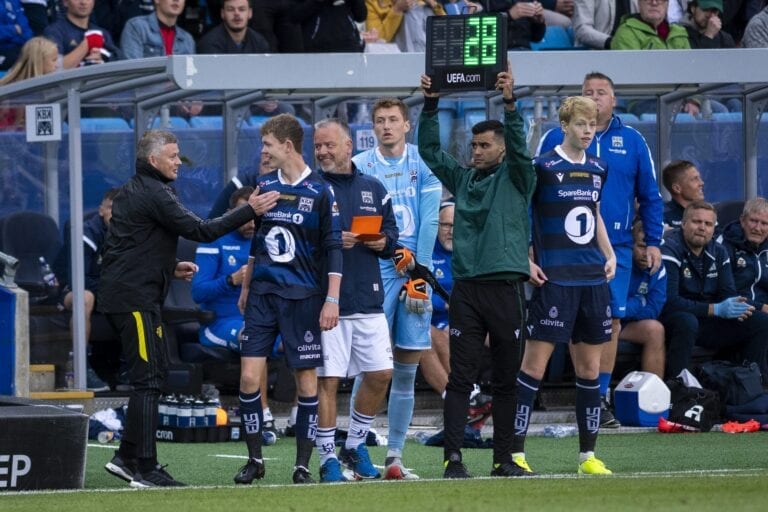 Ole Gunnar Solskjaer‘s son has assured that he always gets food after comments made by his father following Manchester United‘s 3-1 victory over Tottenham on Sunday.

United consolidated their position in second place in the Premier League with an excellent second half performance.

Despite going in at the break 1-0 down thanks to Heung-Min Son’s close range finish, the Red Devils hit back through Fred, Edinson Cavani and Mason Greenwood.

After the game, however, all the focus was on a controversial VAR decision made in the first half.

Cavani thought he had put United ahead after a good run and finish past Hugo Lloris, but the goal was ruled out for a foul by team-mate Scott McTominay.

Replays showed that McTominay’s hand had made contact with the face of Son, who subsequently went down and needed treatment.

The South Korean international would rejoin the action, and went on to score the opening goal for Jose Mourinho‘s side.

When asked about the incident after the game, Solskjaer showed his displeasure at Son’s actions.

He said: “We shouldn’t be conned, but I have to say if my son stays down like this for three minutes, and he gets 10 of his mates around him, if he gets that in the face from one of his other mates and he needs 10 mates to help him up, he won’t get any food.”

Spurs boss Jose Mourinho reacted strongly to the Norwegian’s comments in the post-match press conference, and said he had already spoken to Solskjaer.

“Sonny is very lucky that his father is a better person than Ole,” he said.

“Because as a father you have always to feed your kids, doesn’t matter what they do.

“If you have to steal to feed your kids you steal. I’m very, very disappointed.

“With me, like they say in Portugal, bread is bread and cheese is cheese.

“I have told Ole already what I think about his comments.”

Noah Solskjaer – the son of the United boss – has now had his say.

The 20-year-old – who features for hometown club Kristiansund in Norway, and who made his debut in 2019 against the Red Devils – said that he does always get food.

He told Norwegian newspaper Tidens Krav: “I always get food, I can assure everyone about that.

“[Teammate] Max [Williamsen] asked me if I had been given food when he met me before training today.

“I have never been lying down the way Son did.

He then claimed: “Mourinho probably just wanted to take the focus away from the fact they had lost.”