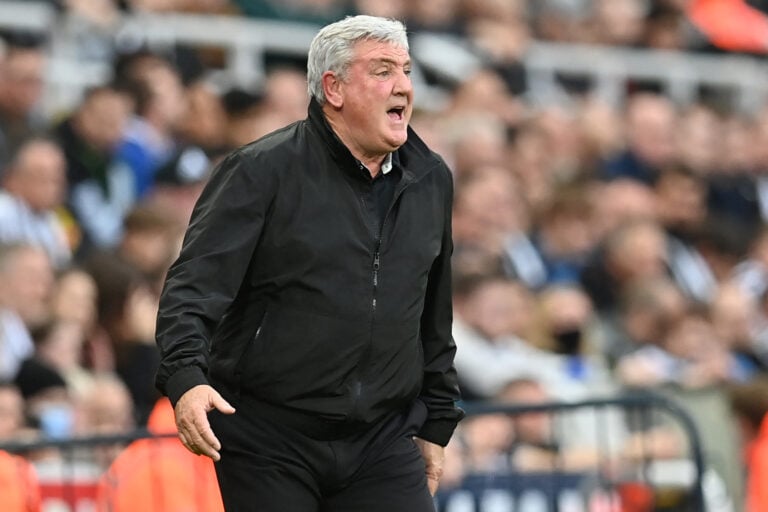 Steve Bruce believes he has the “near future” to turn Newcastle’s form around and help them climb the Premier League table.

The Magpies were taken over by an investment group led by Saudi Arabia’s Public Investment Fund (PIF) earlier this month.

Since then, Bruce’s position as manager has been the subject of much speculation. A number of names have been linked with taking over, including the likes of Frank Lampard and Eddie Howe.

The Telegraph reported that Bruce himself had expected to be sacked last Monday, but he remained in the post for Newcastle’s game against Tottenham yesterday.

The Magpies took a second minute lead thanks to Callum Wilson’s header, but found themselves 3-1 down at half-time.

Eric Dier’s own goal gave them hope late on, but the game eventually ended in a 3-2 defeat – a result that means Newcastle remain lanquished in 19th position in the Premier League. They are without a win from eight games this season.

Speaking to Sky Sports after the game, Bruce says it will be his job, in the near future, to ensure that the Magpies start picking up points.

He explained: “It’s a big league for big boys and I’ll crack on until I hear otherwise.”

“Every football club needs clarity, from the top right the way through to everything that makes a football club the way it is. The new owners have been very respectful. I can’t say enough of them, the way they’ve gone about their business.”

“We’ve still got our frailties as a team and it’s up to me, in the near future anyway, to hopefully get better.”

The fixture on Sunday was also Bruce’s 1,000th as a manager. He was asked to look back on his time in management and the time he has been in charge of the Magpies.

“I would love to say it’s been a lovely ride,” he replied.

“It’s been difficult, but I think I’ve been the circumstance for a lot of frustration for a lot of years. The people of Newcastle want to see the club move forward. We’ve a wonderful opportunity now, and all I’ve ever wanted was to make sure this great club of ours moves forward. That’s going to take a bit of time.”

Newcastle are next in Premier League action on Saturday when they travel to Selhurst Park to take on Crystal Palace.