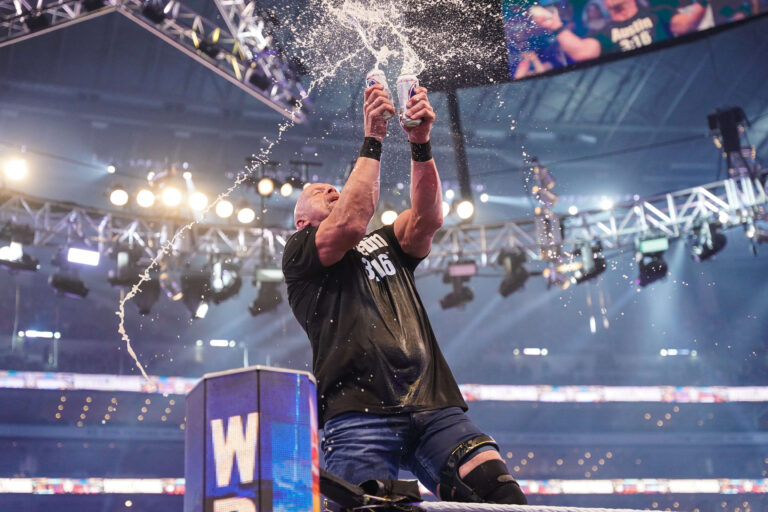 ‘Stone Cold’ Steve Austin produced an incredible performance against Kevin Owens at WrestleMania 38 – and broke a record in the process.

On April 2, ‘The Texas Rattlesnake’ made his triumphant return to in-ring competition on the grandest stage of them all. The crowd of 77,899 fans rose to their feet as one of the greatest wrestlers in history drove to the ring on his signature ATV.

After Kevin Owens had persistently slated his home state, Austin wanted revenge. He agreed to participate in an interview on the ‘KO Show’. There had been rumours that ‘Stone Cold’ could wrestle one final match. WWE, however, kept fans guessing right up to the moment that Austin accepted Owens’ request for a ‘No Holds Barred’ match.

Both men went to battle at the AT&T Stadium, and the contest didn’t disappoint. They traded blows and finishers, and even ended up brawling in the stands. Eventually, the seasoned veteran hit his rival with a brutal ‘Stone Cold Stunner’ and secured a famous victory.

The fans went berserk. Austin had made one of the greatest comebacks in WWE history, and they were there to witness it. And, of course, for his struggles, Austin had earned an ice-cold refreshing can of beer – along with the cans he drank during the match – which he downed to a standing ovation.

The last time he set foot in the ring at WrestleMania 19, he lost against The Rock. So to come back all these years later and get the win undoubtedly meant a huge deal.

But it wasn’t just the victory that helped him secure an incredible record.

Read: Steve Austin net worth: How much has ‘The Texas Rattlesnake’ earned during his illustrious career?

After losing in his last Mania clash against The Rock, we didn’t know whether we’d ever see Austin in the ring again. That was due to the severity of the neck injuries that forced him to retire. But on the first night of WrestleMania 38, he proved everyone wrong and made history in the process.

As per Reddit user u/PickledPeppers101, his main event slot against Owens smashed the record for the longest time between WrestleMania main events. It had been 21 years since his last headline match against The Rock. He dismantled the previous record set by Edge, who had waited 13 years between 2008 and his Universal Championship match against Roman Reigns and Daniel Bryan in 2021.

It may have taken Austin a long time, but he finally managed to make his way back to the biggest stage for one final match. And the fans loved it.