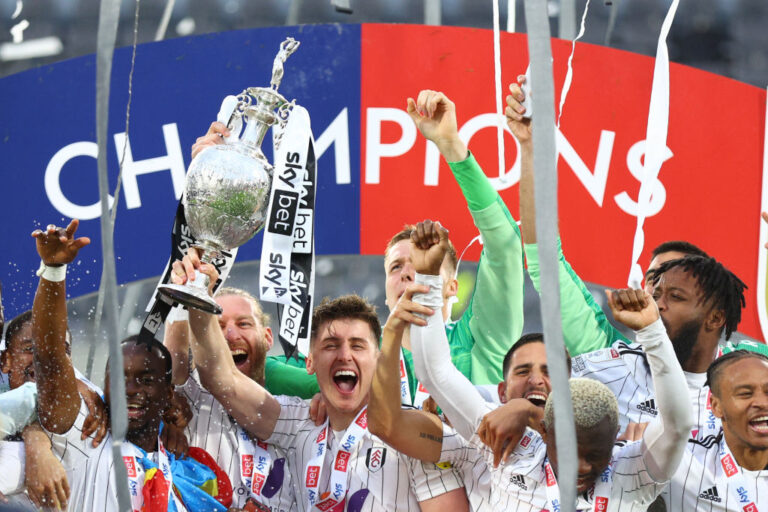 After giving fans a calculation of the 2022/23 Premier League table, the famous supercomputer has been dusted off to predict the 2022/23 Championship table in full – and there are some surprising outcomes.

England’s second tier is one of the most exciting divisions in world football. It is also highly unpredictable.

The word ‘momentum’ is often hard to quantify in football, but going on a run of victories in the Championship – particularly early or late in the campaign – can be season-defining.

In the 21st century, fans have witnessed some incredible sides take the Championship by storm.

For instance, Steve Coppell’s Reading smashed the 46-game points record in 2005/06. They accumulated a sensational 106 points, with just two losses. The likes of Leroy Lita, Kevin Doyle and James Harper tore up the division.

There was also the QPR side of 2010/11. The Rs were spearheaded by the sensational talents of Adel Taarabt, who netted 18 league goals in the season.

More recently, Marcelo Bielsa entered his Leeds side into the argument for the greatest Championship side of all time. Accumulating 93 points, the Yorkshire side won 11 of their last 13 games to seal the title in the 2019/20 season.

In 2022/23, Burnley, Norwich and Watford will hope to bounce back to the Premier League at the first opportunity. Huddersfield will look to avenge last season’s play-off final defeat to Nottingham Forest. And the league’s more established sides, such as Middlesbrough, Bristol City and Preston North End, will be looking to launch play-off pushes.

In truth, it is almost impossible to rule out any of the 24 teams from reaching the top six, such is the competitiveness of the Championship. However, a supercomputer powered by Reach has attempted to predict the table, from 1st all the way to 24th:

Perhaps unsurprisingly, the supercomputer model has predicted Burnley and Norwich to jump straight back into the Premier League.

Norwich have been less active, but have won the Championship twice in the last four seasons. Dean Smith has experience of getting out of the second division, having won the play-offs with Aston Villa in 2018/19.

Watford, meanwhile, are set to transition to a more progressive style of play under new boss Rob Edwards, who joined the club from Forest Green Rovers. They have kept most of their Premier League squad together, whilst bringing in forward Rey Manaj from Barcelona.

Huddersfield Town will start this campaign with a new manager. Previous boss Carlos Corberan, who guided the Terriers to last season’s play-off final, resigned from his role earlier in July. Preston North End, meanwhile, have not reached the Championship play-offs for 13 years, but are making good strides under Ryan Lowe.

The most notable side positioned in mid-table by the supercomputer is Chris Wilder’s Middlesbrough. Wilder performed wonders with Sheffield United, transitioning them into a more forward-thinking side. He utilised a 3-5-2 formation, with centre-backs overlapping to join the attack.

Boro have done some canny business so far in the transfer window. They have signed Darragh Lenihan – one of the most consistent centre-backs in the division – on a free transfer from Blackburn Rovers. They have also loaned in goalkeeper Zack Steffen from Manchester City and wing-back Ryan Giles from Wolves.

The supercomputer predicts that Nathan Jones and Luton will narrowly miss out on the play-offs after their sixth-placed finish last term, while Gary Rowett and Millwall are again expected to challenge.

West Brom are also expected to miss out on the play-offs for a second consecutive season. Steve Bruce is looking to guide the Baggies back to the top flight after relegation in 2021.

Elsewhere, Swansea are predicted to remain in the 15th position in which they finished last season, although they could be dark horses under Russell Martin and his possession-based style of football.

The supercomputer predicts that Alex Neil’s Sunderland will drop back to League One at the first time of asking, in what would be a highly disappointing outcome for the Black Cats. They won the League One play-offs last season.

Neil knows the Championship well, having managed Norwich and Preston North End in the division previously. He took the former to promotion in 2015 via the play-offs. Relegation would be unexpected – but the Championship is unpredictable.

Another surprise club tipped for the drop are Bristol City. Nigel Pearson’s side could only manage 17th place last term, but also netted 62 goals. The defence caused issues, but they have attempted to rectify that with the signings of attacking full-back Kane Wilson, centre-back Kal Naismith and young goalkeeper Stefan Bajic.

The third side tipped for the drop are Birmingham City. The Blues have been embroiled in ownership turmoil during the close season. They have also lost the services of key player Kristian Pedersen. It will likely be a challenging task to stay up for Birmingham, who will be hoping that a proposed consortium takeover led by former Barcelona striker Maxi Lopez goes through.