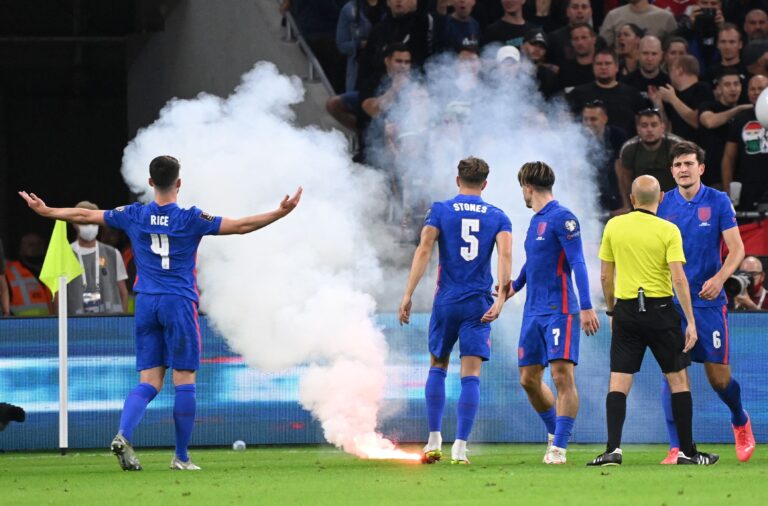 England defeated Hungary 4-0 in Budapest last night to register their fourth win of World Cup qualifying in perhaps the most hostile atmosphere they could have faced.

When Raheem Sterling opened the scoring on 55 minutes for Gareth Southgate’s side, he was targeted with cups and bottles thrown by the home fans as he celebrated.

The throwing continued as Sterling’s team-mates ran towards him – but England players responded in a brilliant way that quickly went viral on social media.

Declan Rice walked over and picked up one of the cups that was stationed on the pitch, before pretending to drink from it.

The booing and jeering would continue throughout much of the rest of the match, but England went on to hammer a further three goals past their opposition to cap off a superb victory.

The win, however, was marred by reports of racist abuse from the Hungarian fans towards Sterling and Jude Bellingham.

England manager Gareth Southgate said the abuse was “completely unacceptable” and added: “They [players] recognise the world is changing.

“Although some people are stuck in their way of thinking and prejudices, they are going to be the dinosaurs in the end because the world is modernising.”

A statement from FIFA read: “First and foremost, FIFA strongly rejects any form of racism and violence and has a very clear zero tolerance stance for such behaviour in football.

The Hungarian Football Federation were charged with discriminatory behaviour of its supporters by UEFA earlier this year after a number of incidences of racist and homophobic abuse during Euro 2020.

They will play their next three UEFA competition games behind closed doors, with one of those games suspended for two years.

However, the World Cup qualifiers fall under the juristiction of FIFA, not UEFA, who have not sanctioned Hungary.

Therefore, over 60,000 fans were allowed in to the Puskas Arena last night.

FIFA continued: “With regards to the previous UEFA sanction against Hungary, please note that as specified by UEFA at the time, this sanction is to be served in UEFA competitions.”