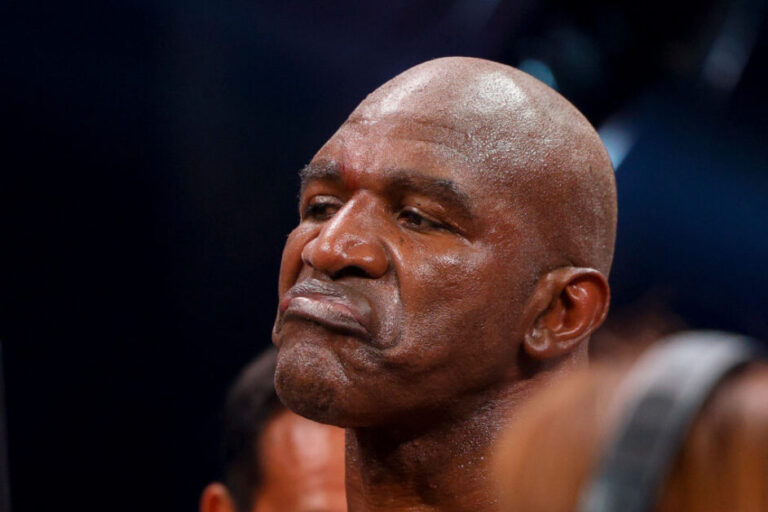 Evander Holyfield is one of the greatest boxers of all time, and in 2007 he gave WWE fans a glimpse of exactly what he was all about.

The 59-year-old provided combat sports fans with many an electrifying moment throughout his storied career. He started his legacy in the cruiserweight division, where he dismantled his opposition en route to becoming the division’s first-ever undisputed champion.

But he became a superstar when he made a move to heavyweight. Most pundits felt that the American would be undersized at his new weight class. But he proved all the doubters wrong by conquering all the giants put in front of him.

What he accomplished in boxing’s premier division

He earned the accolade of the best fighter on the planet on more than one occasion. He defeated the likes of George Foreman, Larry Holmes and Buster Douglas. But his greatest night came against Mike Tyson.

The Alabama man was a massive underdog in his 1996 bout with ‘Iron Mike’. His fearsome opponent was regarded as the most dangerous man on the planet, capable of taking out any fighter with one shot. However, that wasn’t the case against ‘The Real Deal’. Holyfield bided his time and took his rival out in the eleventh round.

The pair eventually met in a rematch the following year, and with one chomp, Tyson made history. He bit Holyfield’s ear clean off in one of the biggest scandals in sporting history.

Read: When Mike Tyson and Steve Austin faced off in an incredible promo

Of course, as crazy as this was, it didn’t define either man’s career. Tyson was remembered as the terrifying freak of nature he was. And his arch-nemesis has gone down as a record-breaking four-time heavyweight champion.

Boxing is a traditional art where the fighters take each other on in the noblest form of combat. It’s about competition, but sometimes the more commercially valued stars get opportunities elsewhere, and ‘The Real Deal’ got a big one in 2007.

Evander Holyfield proves himself in the WWE

There aren’t many fighters alive capable of beating the former two-division world champion in the squared circle. Let alone a man who doesn’t even compete in that specific sport.

When it was announced that Montel Vontavious Porter – MVP – would have to withdraw from a WWE boxing contest against Matt Hardy due to a recently diagnosed heart condition, both wrestlers were allowed to pick replacements.

After Hardy decided to keep his place in the Saturday Night’s Main Event Live show, MVP pulled out a trick from under his sleeve. He chose Evander Holyfield as his replacement.

Multiple-time tag team champion Hardy is used to diving off ladders, so the prospect of a simple punch to the face did anything but unsettle him. He also had the use of a protective helmet available.

However, when the shots started flying in his direction, it was another story. Hardy hit the ground on multiple occasions but somehow made it to the second round.

Although his desire was there, ‘Big Money’ lacked the skillset to compete with the boxing great in this particular discipline. But luckily for him, Holyfield chose to show mercy, much to the dismay of MVP. The wrestler stepped into the ring demanding that the boxer finish the fight, and he obliged – just not against Hardy.

The heavyweight landed an absolute rocket of a right hand to the head of MVP, which sent in the United States Champion crashing to the mat.

That’ll teach him not to tell Holyfield what to do.