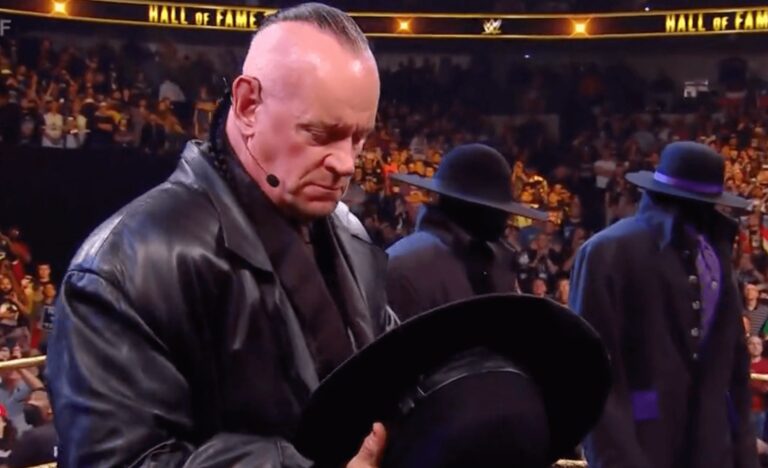 The Undertaker was inducted into the WWE Hall of Fame on Saturday – and had some very intriguing words for fans as he left the arena.

‘The Phenom’ has established himself as one of WWE’s biggest ever stars over its lifespan, captivating crowds for well over 25 years with a range of personas.

He was inducted into the Hall of Fame, as part of the 2022 class, by none other than WWE chairman Vince McMahon. And one the inductee walked into the ring, he was met with a showing of rapturous applause.

The Undertaker’s in-ring career in WWE has been nothing short of incredible. He is a seven-time world champion and a six-time tag team champion. But what sets ‘The Deadman’ apart is his WrestleMania streak. He beat 21 consecutive opponents at ‘The Show of Shows’ before losing to Brock Lesnar at WrestleMania 30.

Read: How Undertaker reacted to plans for Brock Lesnar to end his streak

But The Undertaker was more than his in-ring work. He struck fear into opponents’ eyes, created genuine anticipation every time the bell tolled for his iconic entrance music and managed to create a lasting legacy with multiple personas. Fans never knew what to expect when The Undertaker walked to the ring, which kept them on the edge of their seats.

The Undertaker retired from professional wrestling in June 2020. After a career spanning 30 years, nothing was left in the tank.

As it turned out, he bowed out with a cinematic Boneyard Match against AJ Styles. Despite the constraints placed on WWE due to the Covid-19 pandemic, it was an incredible spectacle to witness.

The Undertaker reprised his ‘American Badass’ gimmick for one final match, burying Styles before riding off into the sunset.

Therefore, his final in-ring match was a gauntlet match at the Super ShowDown pay-per-view in February 2020. ‘The Phenom’ appeared in the event as a surprise final entrant, defeating Styles to win the match.

Given that fact, however, rumours about a potential final match have never fully subsided. Although many fans saw the Styles match as the perfect way to bow out, given it encapsulated almost everything The Undertaker was, others haven’t entirely closed the door on a return.

At the 2022 Hall of Fame ceremony, The Undertaker gave a heartfelt speech thanking all those who had helped him along the way.

There were mentions of his on-screen half-brother Kane, and his legendary manager Paul Bearer. He also thanked the likes of Bruno Sammartino, Bret Hart, Ric Flair and Dusty Rhodes and acknowledged Triple H, Shawn Michaels, his wife Michelle McCool, Vince McMahon, and others.

Simply put, the speech recognised a who’s who of wrestling greats. However, before he left the arena, ‘The Deadman’ had a final message for fans chanting ‘one more match’.

“Never say never,” he said. And although we may never see The Undertaker competing in the WWE ring, he certainly isn’t ruling anything out.