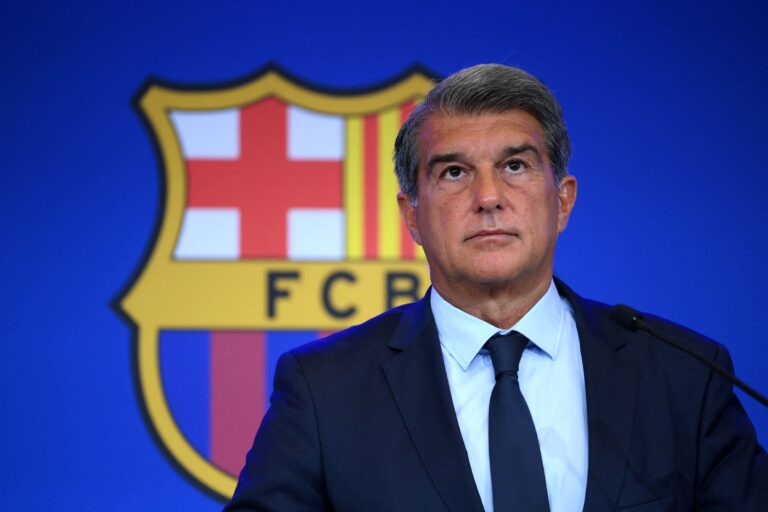 Speaking during a live press conference, Laporta said that Barca are in €1.35 billion (£1.15 billion of debt), and that salaries represent 103% of the club’s income.

The situation led to the departure of Lionel Messi, who moved to Paris Saint-Germain earlier this month.

Barca released a statement confirming that the Argentinian icon would be leaving the club, stating that his new contract could not be registered due to LaLiga restrictions on player registration.

The club were also unable to register new signings Eric Garcia or Memphis Depay until captain Gerard Pique agreed to take a pay cut on the eve of their opening LaLiga match against Real Sociedad on Saturday – an action which the club president thanked him for.

Laporta explained the financial situation: “Our salaries represent 103% of the club’s total income. That’s 20-25% more than our competitors.

“The first thing we had to do when we arrived was to ask for a loan of €80m because otherwise, we could not pay the salaries.

“The previous regime was full of lies.”

Laporta was elected as Barca president for a second spell back in March, five months after previous president Josep Maria Bartomeu resigned.

He had previously presided over the club between 2003 and 2010, and was the man who appointed Pep Guardiola as first team manager.

Laporta blamed Bartomeu for the financial position that the club are in.

He said: “We found the wage policy in the form of an inverted pyramid – veterans on long contracts and youngsters on short deals.

“There were no wage cuts – lies.

“We had found that disproportionate payments have been made to intermediaries, not even agents.

“Barcelona has a negative net worth of €451m – it is a terrible inheritance. What has been happening is very worrying.

“Bartomeu’s letter is an effort to justify management that is unjustifiable. It is an exercise in desperation.

“They are responsible for everything until March 7. They will not escape their doing.”

Despite the perilous nature of the situation, Laporta concluded that he believes it is “temporary”.

“The strategic plan based on our credibility and experience, on the assets that Barca have, makes this situation temporary,” he explained.

“I think that in a couple of years, the club’s economy will be healthy.”