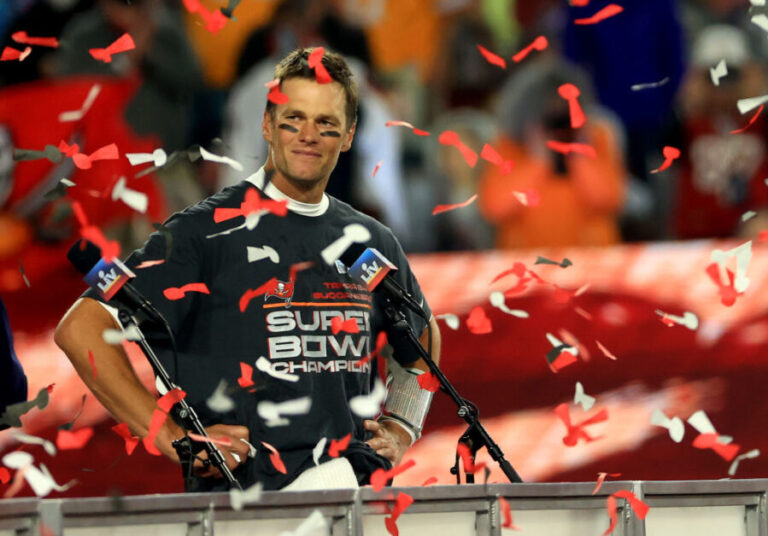 The Greatest NFL player of all time, Tom Brady, has announced his retirement after an incredible career. A serial winner, the quarterback has competed at the pinnacle of American Football for more than two decades.

One of the greatest athletes ever, Brady retires at the age of 44, just one season after winning Super Bowl LV with the Tampa Bay Buccaneers.

A Hall of Fame career

Brady finishes his career as a seven-time Super Bowl Champion – six of those with the New England Patriots.

His seventh was won with the Tampa Bay Buccaneers, the first time a team won a Super Bowl in their home stadium. Seven Super Bowl wins is not only the most of any player, but also more than any franchise has won too.

Going beyond team achievements, the legendary quarterback holds numerous personal awards. He is a three-time regular season MVP, while also winning five Super Bowl MVPs. The Super Bowl MVPs in particular cement his legacy as a big performer on the biggest stage.

In addition to accolades, Tom Brady retires holding a number of records. He is the all-time leader in passing touchdowns, QB wins, and passing yards.

Furthermore, he has the most career starts in NFL history, with 316. Included in this is the most Super Bowl appearances, of which Brady has ten.

An absolutely incredible, unbelievable career which may never be matched.

In a statement posted to his social media, Brady thanked many people who had an impact on his career.

He started off by giving his thanks to his Buccaneers teammates.

Next, Brady thanked the fans and people of Tampa, plus the franchise owners. He then moved on to Buccaneers staff, including GM Jason Licht and head coach Bruce Arians.

Finally, alongside Bucs coaches, Brady thanked his own personal team, then of course his family.

Eagle-eyed Man United fans may have noticed that he thanked the Glazers.

Tom Brady and the Glazers

The Glazer family, along with Manchester United, own the Tampa Bay Buccaneers of the NFL. In 2020, as a free agent, Tom Brady signed with the Buccaneers, after playing his entire career before that in New England.

Despite his pedigree as an all-time great, signing a 43-year-old Brady may have been seen as a risk. However, the gamble fully paid off. A 31-9 victory over Kansas City in Super Bowl LV meant the signing of Brady was fully justified.

The Glazers couldn’t be happier, crediting Brady with turning round the culture of their franchise to deliver a championship.

The good feelings appear to be mutual, with Brady thanking them in his retirement speech for “taking a chance” on him. There are even calls from fans to offer Brady an ownership stake in the Buccaneers, a true reward for his service.

However, there wasn’t a fairy tale ending for Brady and the Glazers’ team. The Buccaneers lost to the LA Rams 27-30 in the Divisional round of the playoffs.

Despite this disappointing ending, Tom Brady’s retires with a legacy as the greatest player ever.