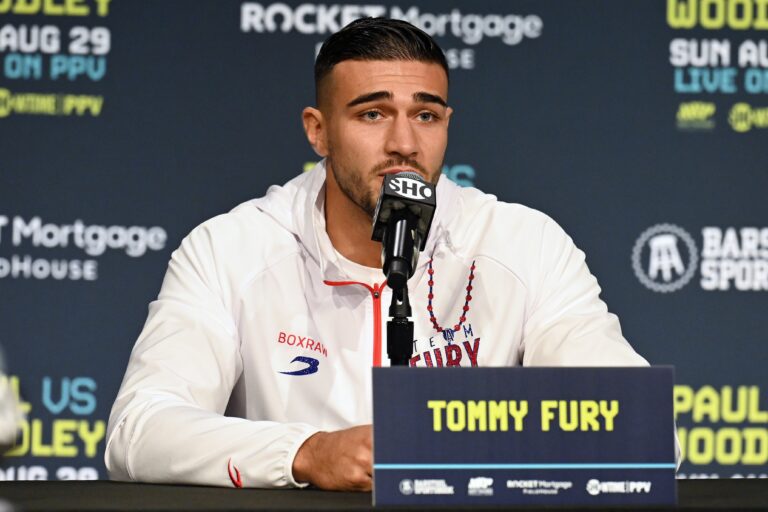 Tommy Fury has predicted that his brother Tyson will emerge victorious over Deontay Wilder when the pair face off in their trilogy fight on Saturday night.

The bout, which will take place at the T-Mobile Center in Las Vegas, will be the first time either fighter has stepped inside the ring since February 2020.

Fury defeated Wilder via technical knockout on that occasion, and therefore won the WBC and The Ring heavyweight titles.

It was the first time the ‘Bronze Bomber’ had tasted defeat in his professional career. Fury, meanwhile, extended his own unbeaten record at professional level in becoming world heavyweight champion for the second time.

The first bout between the pair ended in a draw back in December 2018.

Fury was ordered by a US judge in mediation to fight Wilder for a third time back in May. The trilogy bout was initially scheduled for July 24, but was delayed after the ‘Gypsy King’ tested positive for Covid-19.

His brother, Tommy, predicts that Fury will retain his heavyweight titles via stoppage in Las Vegas.

Speaking to BT Sport, he said: “He’s sitting back on that throne where he belongs.

“I think what’s going to happen in Tyson-Wilder III is you’re going to see Deontay come out and will be throwing a million punches per round for the first four or five rounds.

“I think after that, it’ll be just like it was in the second fight. I feel like whenever Wilder has spent what he’s throwing, and he hasn’t any more left, you’re going to see Tyson come on very strong.”

He then added: “You’re definitely going to see a stoppage again.”

Tyson Fury v Deontay Wilder III is set to commence at around 4am UK time on Sunday morning, with the fight itself is taking place in Las Vegas, Nevada.

The bout will be shown on BT Sport Box Office in the UK and Ireland.

Who is on the undercard of Fury v Wilder III?

Three fights have been confirmed for the undercard of Fury v Wilder at the time. All bouts will be contests between heavyweight boxers.