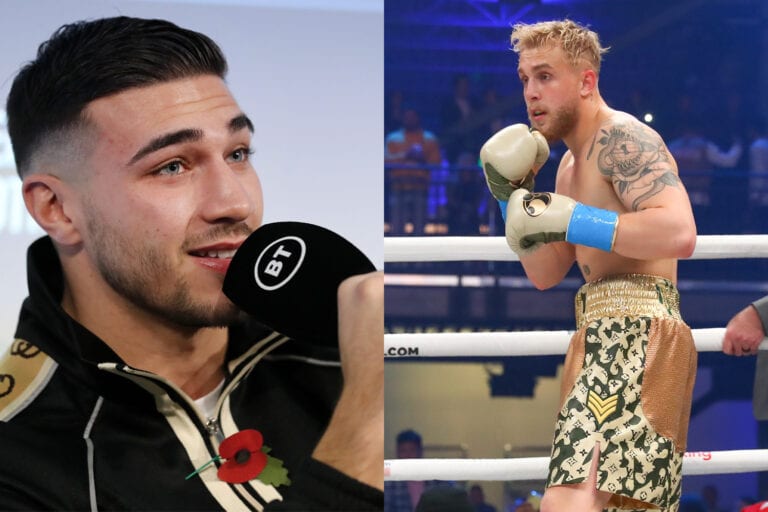 After some well-publicised trash talking on Tuesday evening, Jake Paul and Tommy Fury have continued to mock each other on social media.

The whole thing kicked off when Tyson Fury congratulated his brother following his weekend win on Twitter, before calling out the YouTuber as a potential future challenger.

Following that there was a bit of back and forth before Fury called out Paul after the YouTuber released a video claiming he didn’t know who the former Love Island star was.

In his video reply, Paul didn’t agree to the fight – instead calling Tommy a “Ken Barbie doll looking motherf*****”.

And that seemingly didn’t go down well with the 21-year-old.

Wearing a blonde wig in an attempt to mock Paul on a Twitter video, Fury said in an American accent: “Sorry bro, I didn’t see you there, I was too busy being a massive p****”.

He then added: “Jesus Christ, I don’t know how you take yourself seriously looking like this, my God.

“I put it on a plate for you, I asked you if you wanted to fight and you decided to laugh it off, as usual.

“Stick to your little YouTube videos behind your little desk and don’t come over to this boxing world because you’ll get laid out in 30 seconds flat.”

Paul & Fury yet to be defeated professionally

The conclusion to be taken from both men’s videos seems to be that we are no closer to finding out whether Paul and Fury will agree to a bout.

The 24-year-old has since hit out at the likes of Conor McGregor and Saul “Canelo” Alvarez on social media.

He takes on former Bellator champion Ben Askren on April 17 in his next fight.

He has won four of his five career bouts via knockout.