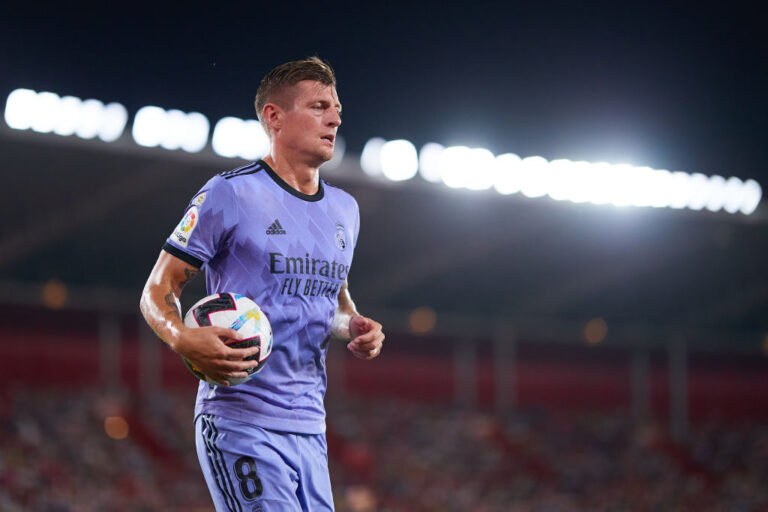 Toni Kroos named four legendary figures, including three from Real Madrid, when asked for his best footballers in each position.

Having won a staggering amount of silverware in his career, Kroos himself is one of the finest midfielders of this generation. Despite this, the German international humbly chose not to pick himself in response.

The question came as part of a special interview called Kroos 90. In this Q&A, Toni Kroos fielded questions from over 90 celebrities and other famous figures. According to AS, these included Robbie Williams, Dirk Nowitzki, and even Roger Federer.

However, the question from streamer Elias Nerlich proved an insightful talking point. He asked the Real Madrid man for the best goalkeeper, defender, midfielder, and forward – in Kroos’ opinion, of course.

With such an incredible array of talent to choose from in both teammates and opponents, Kroos could easily select some current legends of the game.

Firstly, Toni Kroos picked fellow German international Manuel Neuer. Internationally, the pair reached the pinnacle of football as they won the 2014 World Cup with their country. Neuer and Kroos were both critical parts of that team, too, starting in the final.

Additionally, Manuel Neuer won the golden glove for the best goalkeeper at that tournament.

Before Brazil 2014, the pair achieved success at Bayern Munich. As teammates, they picked up several domestic trophies. Both also played a key role in Bayern’s memorable treble in the 2012/13 season.

Kroos then moved away from Bayern teammates when making the rest of his choices. Instead, he picked three Real Madrid legends. First of all, Toni Kroos ranks his former captain, Sergio Ramos, as the best defender of his career.

These two were teammates for seven years, from Kroos joining Real in 2014, to Ramos leaving in 2021. During this period, Kroos and Ramos were part of the spine of the Madrid side that won three consecutive Champions League titles.

Ramos also matches Toni Kroos with a World Cup medal. He lifted the trophy with Spain in 2010.

Now at PSG, the Spaniard has recovered from injury issues to hopefully be a more prominent figure for the Ligue 1 side.

Fans will be unsurprised to see that the German has picked fellow midfield partner Luka Modric as the best midfielder he has played with.

Modric has come a long way since being branded La Liga’s “worst signing of the season” in 2012. From that point, he and Kroos have made up Madrid’s engine room for nearly a decade. Along the way, Modric picked up the 2018 Ballon d’Or, breaking up the years of Ronaldo/Messi dominance.

He also captained Croatia to their first-ever World Cup final in 2018. However, they, unfortunately, came up short in a 4-2 defeat to France. His place as one of the best midfielders in the world is undisputed, though.

Finally, who else could it be? Ronaldo and Kroos shared a pitch at Real Madrid for just four years. But, in that time, they certainly made the most of it.

Aside from the hat-trick of Champions Leagues, they picked up three UEFA Super Cups, a La Liga, and four club World Cups. But from an individual perspective, CR7 will go down as arguably the greatest Galactico of all time.

The current Man United star has five Ballon d’Or, plus is Real Madrid’s all-time leading goal scorer. Away from Madrid, he has won league titles in England and Italy, while winning a Champions League with United.

Ronaldo also helped Portugal to win their first-ever international trophy whilst at Real, winning at EURO 2016. They followed this up with a Nations League triumph a few years later.

In terms of teammates, it is hard to argue with the quality that Toni Kroos selected in each category. Given that he had the option to select players he had come up against, as well, it shows the height at which Kroos rates the four players he did choose.