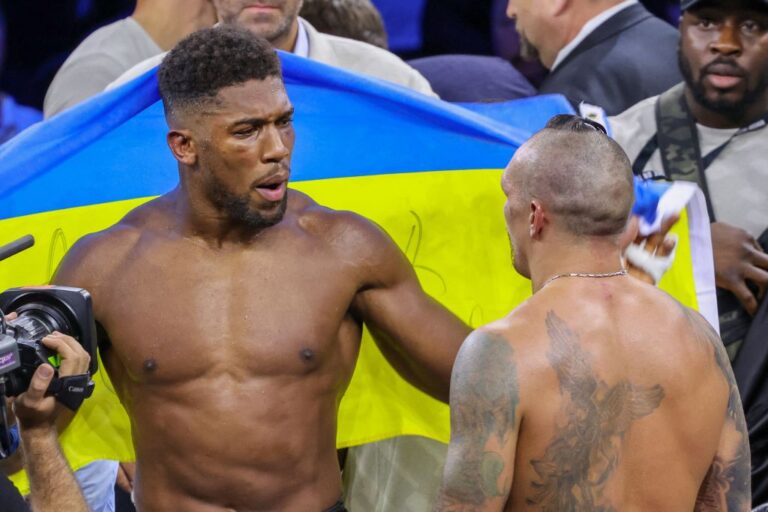 Frank Warren has hit back at Eddie Hearn’s claims that Anthony Joshua threw Oleksandr Usyk’s belts out of the ring due to his lack of faith in the system.

On August 20, two of the best heavyweights on the planet met in the most eagerly anticipated fight of the year.

After losing the first bout, AJ desperately wanted to reclaim his titles. And he did everything in his power to do just that. He changed trainer and switched tactics. But there was nothing he could do to defeat the mighty southpaw.

And after trying so hard to avenge his loss, he walked away from Saudi Arabia with nothing.

This sent the Brit into a post-fight meltdown, where he kicked off in the ring. He delivered a peculiar speech, in which he discussed going to jail, explained why being 18 stone has caused him difficulty, and implored the crowd to cheer three times for his opponent.

The Anthony Joshua decision that resulted in huge controversy

In a fit of rage, he launched two of the champion’s titles out of the ring. This left the fans in a state of complete confusion. And to try and put their minds at rest, Eddie Hearn came forward to give his version of why it happened.

The promoter told iFL TV: “He’s held on to those belts for a long time, and those governing bodies have charged him a lot of money and put a lot of mandatories on him. I think he’s lost a lot of faith in the system, and I think he started to not be interested in fighting for belts anymore. I think he just wants to fight for enjoyment and to challenge himself.”

However, Hearn’s biggest rival doesn’t agree with that assessment.

In the bout’s aftermath, Tyson Fury‘s promoter gave his opinion on the matter.

“He was emotional. I think Joshua was maybe a bit embarrassed about what happened in the ring. At the end of the day, he’s lost his fight. He fought better and showed more heart in the second fight than he did in the first.

“You can only do your best, be proud that you did your best. He was in there with a guy who’s got better skills and is the better fighter.”