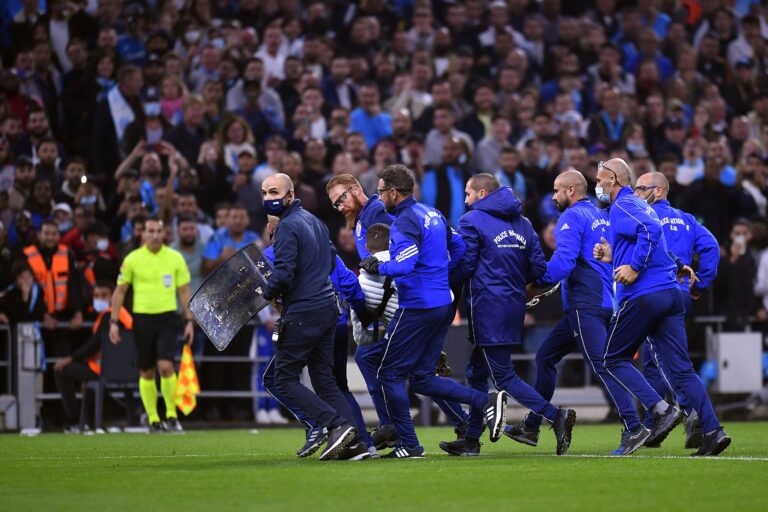 A total of 21 arrests were made by police after a series of fan incidents during, before and after Marseille’s Ligue 1 fixture against Paris Saint-Germain on Sunday, according to reports.

Marca say that as well as the arrests, nine police officers were reportedly injured in the chaos. One of those officers was hit by a stone in the face.

One of those incidents were broadcast during the match, which ended in a 0-0 draw. Lionel Messi was chased by a pitch invader whilst in possession of the ball. Neymar, meanwhile, had to take corners alongside police protection due to bottles and missiles being thrown onto the pitch. There were also smoke bombs set off.

Fixtures involving Marseille have seen their fair share of trouble this season. Their Ligue 1 clash at Nice was suspended on August 22 when Nice fans invaded the pitch. That was after Dimitri Payet was struck in the back by a bottle thrown by home spectators, with the West Ham midfielder then launching one of the bottles back into the stands.

Nice were given a three-game spectator ban and docked one point for the incident. Payet and team-mate Alvaro Gonzalez, meanwhile, were given suspensions for Marseille.

Last month, Marseille were fined €60,000 by the Ligue de Football Professionnel (LFP) after some of their fans used pyrotechnic devices during a home game against Stade Rennais.

And their Europa League game against Galatasaray was temporariliy suspended after fans of both sides threw pyrotechnic items onto the pitch – and at each other.

Finally, Marseille and Angers were both given punishments by the LFP this month after crowd trouble in the Ligue 1 fixture between the two sides.

Jorge Sampaoli’s side currently sit fourth in Ligue 1, having recorded 18 points from their opening 10 games. Their fixture against Nice is set to be replayed on Wednesday evening.