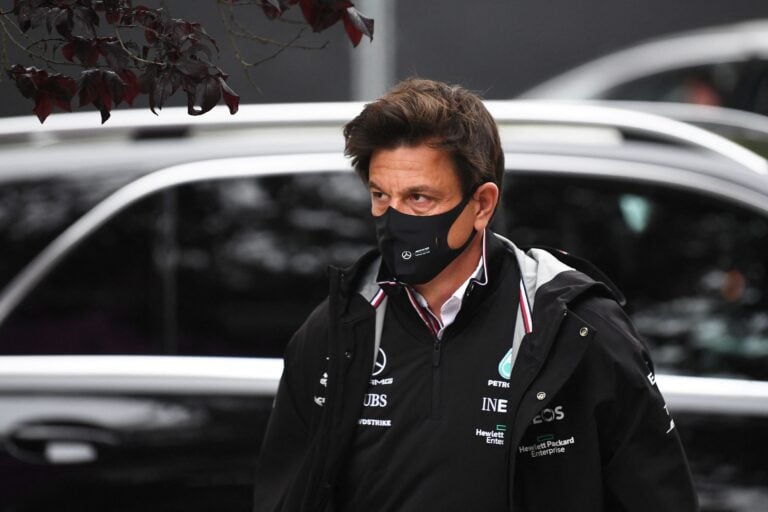 Mercedes team principal Toto Wolff has said that Lewis Hamilton could not have completed the Turkish Grand Prix on one set of intermediate tyres.

All 20 drivers started the race on the green-striped intermediate tyres, which are used in light rain or damp conditions.

The tyres were used throughout the 58 laps of the Istanbul Park circuit, with track conditions not improving sufficiently enough for dry tyres to be put on.

Most drivers pitted for fresh intermediates just after the halfway stage but Hamilton, then running fifth, elected to stay out.

The pit stops elevated him up to third place, and Hamilton expressed that he wanted to complete the race on one set of tyres.

Eventually, on lap 51, he pitted for new tyres, but re-emerged in fifth. He later questioned the decision over Mercedes team radio, and said post-race that he did not expect to lose several positions after the stop.

The 36-year-old would go on to finish the Grand Prix in that position, and lost the lead of the World Drivers’ Championship to Max Verstappen, who finished the race in second.

After the race, Wolff said that Hamilton would not have made it to the end of the race had he not come in for a pit stop.

He told Sky Sports F1: “The intermediate obviously looked really scary, but we thought that we could maybe hang out there and finish third with not stopping, or if a dry line appears maybe going on to a soft tyre until the end.”

“So we balanced between pitting, taking it very conservative, fighting with [Charles] Leclerc and [Sergio] Perez on the track for P3, or taking a little bit of a gamble and either winning or finishing third.”

Hamilton says pitting “the safest thing to do”

Writing on Instagram this morning, Hamilton said that pitting for fresh tyres was “the safest thing to do.”

He wrote: “As a team we work hard to build the best strategy possible but as the race progresses you have to make split decisions there are so many factors constantly changing.”

“Yesterday we took the risk to stay out hoping it would dry, it didn’t. I wanted to risk it and try and go to the end, but it was my call to stay out and it didn’t work. In the end we did pit and it was the safest thing to do.”

The 2021 Formula 1 season continues on October 24 with the running of the United States Grand Prix in Austin, Texas.

Hamilton goes into the Grand Prix six points behind Verstappen in the world championship standings with six races remaining in the season.