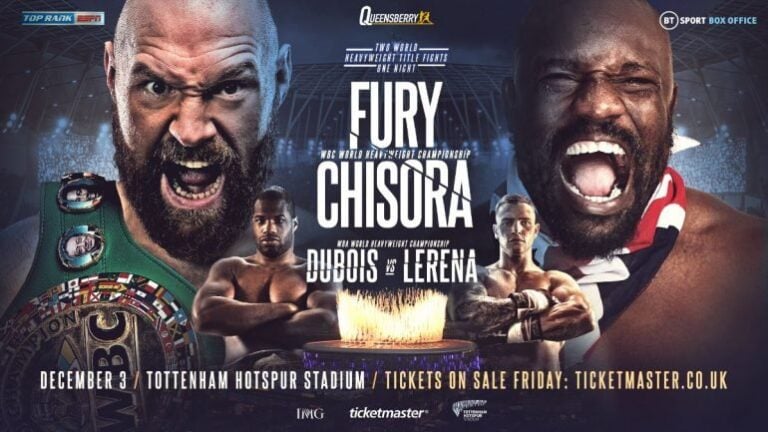 While Tyson Fury vs Derek Chisora has gone down like a lead balloon, fans are somewhat excited for an intriguing co-feature attraction between Daniel Dubois and Kevin Lerena.

In typical boxing fashion, the public have lost ‘The Gypsy King’ vs AJ and instead have to settle for a slice of out-of-date pie. For some unknown reason, Frank Warren and Fury have selected ‘Del Boy’ as the opponent for what they’re calling a ‘blockbuster event’ on December 3. Not only has the ageing gatekeeper done nothing to earn a shot at the belt, but he’s also lost to the 6 ft 9 giant twice.

So with that said, it comes as no surprise that the boxing community has hit back. However, while the main event ranges high on the scale from bad to horrific, Queensberry promotions have at least given boxing heads something to look forward to in the form of a cracking heavyweight collision.

When a young Dubois arrived on the scene, he made an instant splash, going through every opponent in his way. However, when the prospect stepped up against Joe Joyce, he felt the full force of ‘The Juggernaut’s’ outrageous engine.

The loss damaged the youngster’s confidence. But it didn’t take him long to get back on the horse. Following a run of wins, he flew to Miami to challenge Trevor Bryan for the WBA ‘Regular’ title. And while the belt on the line meant very little, Dubois impressed combat sports enthusiasts with a tremendous performance, stopping the American in the fourth round.

However, in order to keep the championship, he’ll have to fend off a sublimely skilled opponent.

While Dubois will possess a solid size advantage on the night, his South African opponent has quite a few tricks up his sleeve. After losing early in his career, Lerena put together a solid run of wins, en route to picking up the IBO Cruiserweight title against Youri Kayembre Kalenga.

As a result, ‘The KO Kid’ rose to superstardom in his home nation, making six successful defences. But like most men his size, he realised he’d have to step up a division to make the big bucks.

Thus far into his heavyweight run, the 30-year-old has claimed the scalps of Mariusz Wach and Bogdan Dinu. But the man that will stand in front of him at Tottenham Hotspur Stadium poses a much tougher challenge.

Dubois carries ferocious power and has the fundamental boxing skills to give anyone problems. However, Larena will look to utilise his superior speed and awkward southpaw stance to give his opponent all he can handle.

On a night which has received so much criticism, fans can take some solace in getting to watch this unmissable showdown.