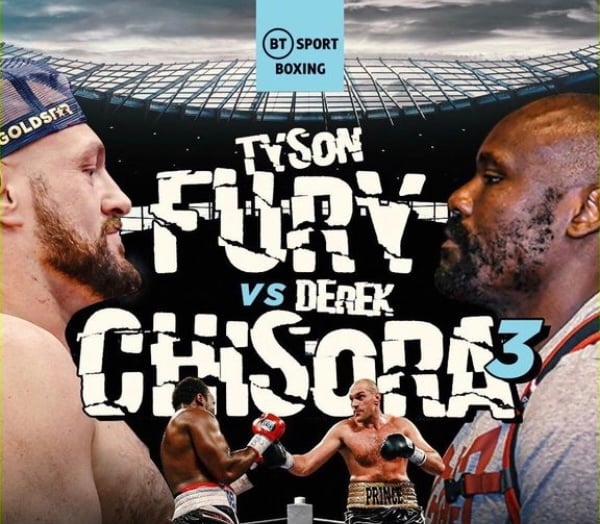 Despite absolutely nobody asking for it, earlier today, Frank Warren confirmed the dreaded news that Tyson Fury and Derek Chisora will face off for the third time.

Last month, fans across the country crossed their fingers and toes in the hopes that the powers that be could finally give us the bout we’ve always wanted. But in typical boxing fashion, we’ve not got ‘The Gypsy King’ vs AJ, or even Fury against any viable opponent. Instead, we’ve been given a complete and utter kick in the teeth in the form of the worst trilogy in combat sports history.

On December 3, the WBC heavyweight champion will defend his thrown against Chisora at the Tottenham Hotspur Stadium. Strangely, Warren has opted for a venue without a roof. But against the right opponent, the event would still likely do serious numbers. However, the contest they’ve gone for makes no sense whatsoever.

Not only has ‘Del Boy’ lost three of his last four, including a complete beat down at the hands of Joseph Parker, but he’s already lost to Fury twice. And while the first fight was competitive, the second certainly wasn’t. The crowd booed throughout ten boring rounds, as the 6 ft 9 giant pieced his opponent up en route to his corner pulling him out in the tenth round.

And while there weren’t many available opponents for this date, Michael Hunter, Martin Bakole and a sprinkling of others threw their hats into the mix. Even Manuel Charr would’ve made for a fresh challenge. Regardless, Warren and Fury have gone ahead with his infuriating bout, and it’s prompted the public to hit back.

In recent years, the Heavyweight King has become the biggest star in boxing. His inspirational journey from depression to the pinnacle of the sport has inspired people all over the world. Consequently, he’s had opportunities in WWE and even sold out Wembley Stadium for his fight against Dillian Whyte.

However, even his most loyal fans can’t defend this appalling move. Thus they’ve taken to Twitter to voice their opinions.