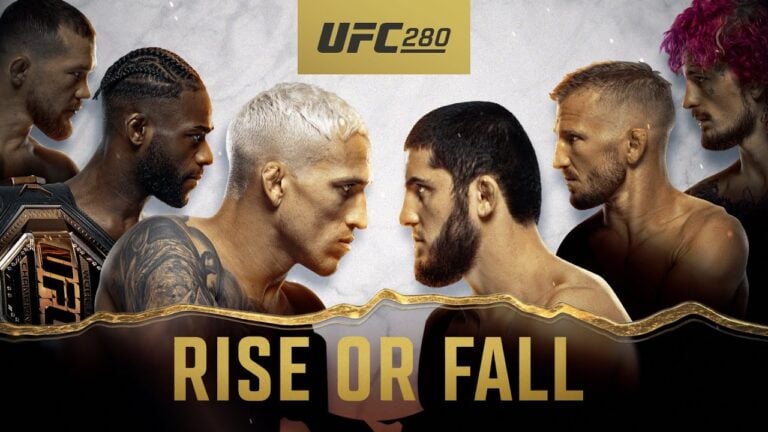 On Saturday, Charles Oliveira and Islam Makhachev go toe-to-toe at UFC 280, and for once, the card will start at a reasonable time for UK fight fans.

In a monumental event for the sport, the two greatest lightweights on Earth will go to war at the Etihad Arena in Abu Dhabi. After being stripped of his championship, ‘De Bronx’ wants to reclaim the belt he never lost in the cage. However, that’s easier said than done, as the man in the opposite corner is desperate to capture the strap for himself.

Since tasting defeat in 2015, Makhachev has destroyed every opponent who dared set foot in the octagon with him. Under the tutelage of UFC icon, Khabib Nurmagemedov, the Russian looks like the only man on the planet capable of bringing the Oliveira train to a halt.

The intriguing match-up has captured the attention of combat sports around the world, and we’ve got all the details you need, so you won’t have to miss a second of the action

Read: Alexander Volkanovski official back up for UFC 280: Oliveira vs Makhachev (sporf.com)

Since its inception less than three decades ago, the UFC has taken the sport of MMA to astronomic heights. However, while the Americans get to enjoy the fights at prime time, UK audiences have to set their dreaded alarms for the middle of the night.

However, for once, due to the card taking place in the Middle East, British audiences can settle down with a takeaway and head up to bed before midnight.

The bill starts at 3 PM, with the main card scheduled to commence at 7 PM. MMA heads can expect the main event to start at approximately 10:15 PM.

While fans are buzzing to watch UFC 280 at a normal time, it does come at a cost. In order to indulge in the blockbuster event, viewers have to buy the PPV via BT Sport Box Office for £19.95.

While the entire MMA community is united in excitement for the headline attraction, there’s a plethora of cracking fights on the undercard for fans to get their teeth sunk into.

In the co-main, Aljamain Sterling defends his Bantamweight title against TJ Dillashaw in a bout that spectators can’t afford to miss. While many disregarded ‘The Funk Master’ as a fake champion after his DQ win over Petr Yan, nobody threw shade on his performance in the rematch.

However, on Saturday night, the Jamaican faces an extremely difficult opponent. Since returning from his ban for taking a performance-enhancing substance, Dillashaw has made no secret of his intent to return to his former glory. Thus making this a fight that MMA lovers can’t afford to miss.

In addition, Yan returns in a terrific collision against rising star, Sean O’Malley.

Alexander Volkanovski official back up for UFC 280: Charles Oliveira vs Islam Makhachev