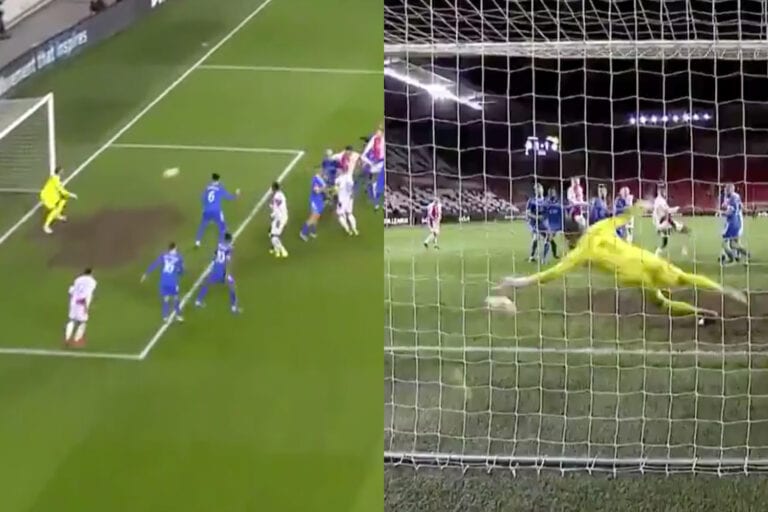 Rangers goalkeeper Allan McGregor pulled off an incredible save in his side’s 1-1 Europa League draw at Slavia Prague on Thursday night.

The 39-year-old rejoined Rangers in 2018 from Hull City, and the fan favourite has consistently proved his worth ever since with top class performances.

Thursday’s last-gasp save could be one of the finest he has ever produced.

With Steven Gerrard‘s men level on the night but in possession of a crucial away goal, they conceded a corner in the 90th minute.

The ball swung away from the six-yard box and into the path of Slavia midfielder Lukas Masopust, whose powerful header was arrowing into the bottom corner.

But McGregor somehow managed to quickly dive to his left and not only prevented the ball from going in, but somehow held on to it as well.

It was a remarkable piece of goalkeeping.

And if you ever needed evidence of exactly how highly thought of McGregor is amongst Rangers fans, look no further.

McGregor’s heroics mean that Gerrard’s side are still yet to taste defeat in European competition this season.

They went behind early against Slavia, with Nicolae Stanciu opening the scoring after just seven minutes for the Czech side.

But Rangers equalised with their only effort of the first half. Filip Helander was on hand to tap Ianis Hagi’s close-range cutback over the line.

And after the game, Gerrard said his side were more than a match for their opponents after the opening goal.

Speaking to BT Sport, he explained: “Once we settled into the game, I think we did more than enough to get back into it.

“Then I think we more than matched them from that point until the end, so I think it’s a fair result over the 90 minutes and the tie’s finely balanced now.”

On the save made by McGregor, he said in the post-match press conference: “Allan came big for us again – it’s a top, top save to get back and drag that back into his grasp, [it] was another world class save.”