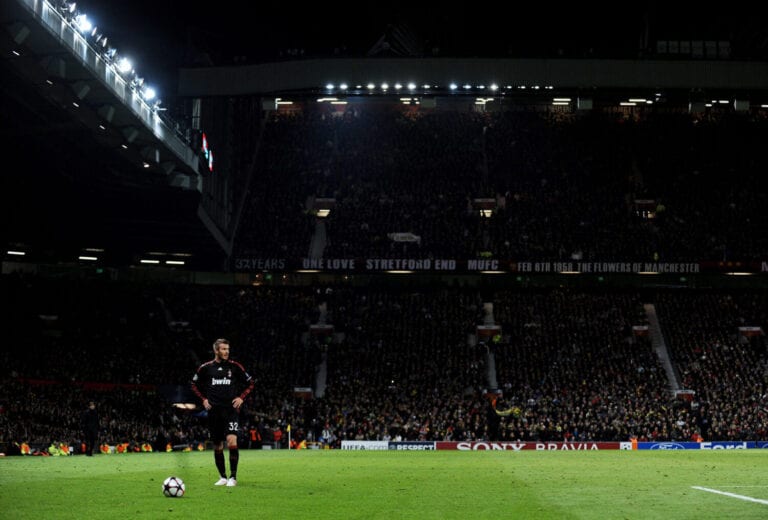 Thursday evening’s Europa League clash between Manchester United and AC Milan will be the first time the two teams have met since 2010.

On that occasion, the sides faced off at the Champions League last 16 stage.

Sir Alex Ferguson’s side won the away leg 3-2 and had placed them in pole position to progress to the quarter-finals of the competition.

The home leg saw the Red Devils go through thanks to a 4-0 victory, but it was a night also notable for the return to Old Trafford of ex-United midfielder David Beckham.

Beckham was on a season-long loan at the Rossoneri from Los Angeles Galaxy at the time.

The midfielder came off the bench and received a rapturous reception when his name was announced over the tannoy.

Beckham was visibly emotional as he took to the field.

He joined the action with 27 minutes to play, but was unable to make a major impact on proceedings with Milan already 3-0 down on the night.

He did, however, almost provide the assist for a consolation for the Italian side, but Filippo Inzaghi could not apply to the finish to Beckham’s cross.

After the full-time whistle blew, the England international walked towards the fans and applauded them, with the crowd responding in the same way.

There’s not many former Red Devils players who would receive such an ovation.

Beckham left United to join Real Madrid for a transfer fee of 37 million euros in 2003.

He made over 250 appearances for the club, having originally fully established himself in the first team after a loan spell at Preston North End during the 1994/95 season.

The midfielder played a key role in the 1998/99 treble-winning side, and took the two vital corners as United scored twice in stoppage time to win the Champions League against Bayern Munich.

In 2019, Beckham returned to Old Trafford again as part of the Treble Reunion match, which saw members of the aforementioned side reunite to face an FC Bayern Legends team.

And in typical Becks fashion, he stylishly placed the ball into the top corner to score United’s fifth goal with the last kick of the game.