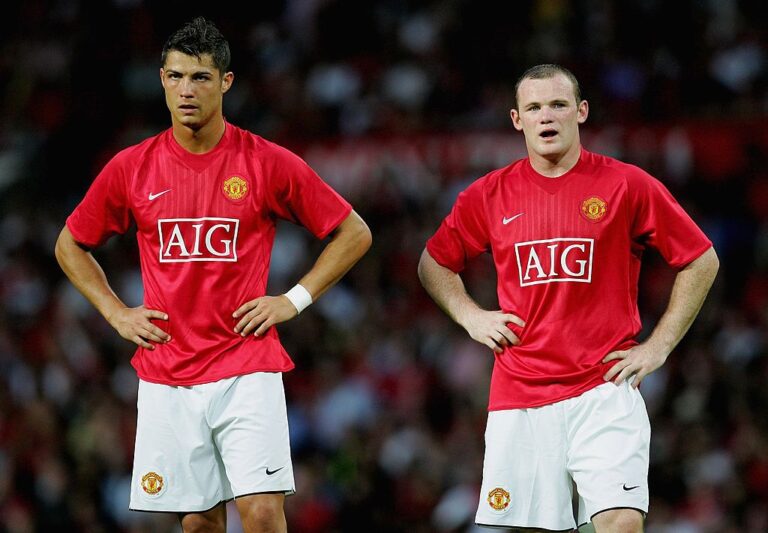 Wayne Rooney has hit back at Cristiano Ronaldo in an amusing fashion after the Portuguese icon branded him “jealous”.

When Manchester United announced that they’d resigned Ronaldo back in August, the fans went berserk. They flocked in their thousands to the club shop and broke the daily shirt sale record in just 24 hours.

He has gone right back to deceiving some of the Premier League‘s best defenders and scoring all-important last-minute winners in the Champions League.

But despite bagging 18 goals in his 32 appearances for the Red Devils this season, some fans have questioned his long-term future at the club. One criticism of Ronaldo is that he doesn’t get involved enough during matches.

After suffering a horrendous season in all competitions thus far, the squad needs a massive revamp. And Rooney doesn’t believe that Ronaldo should feature in those plans.

During his appearance on Monday Night Football, the former England international gave his unfiltered view on what the club needs to do to get back to its best.

He explained: “He’s scored important goals early on in the season in the Champions League, and he’s scored the hat-trick against Tottenham. But I think if you’re looking towards the future of the club, you have to go with younger, hungry players to lift United over the next two or three years.

“Cristiano is getting on a bit and he’s certainly not the player he was when he was in his 20s, and that happens. He’s a goal threat, but I think during the rest of the game, they need more.”

This isn’t the first time they’ve disagreed in recent times. In January, Ronaldo gave an interview in which he stressed that a lower finish than third place for United would be considered a failure. Rooney countered that argument, believing that success for the Red Devils is to win the league.

The pair of footballing icons have shared a tumultuous relationship over the years. In the 2006 World Cup, Ronaldo winked after getting Rooney sent off, which sent the press into a frenzy. But their friendship recovered, and they continued to create moments of magic on the pitch. The Englishman’s technique and physicality, combined with the Lisbon native’s inhuman athleticism, created an almost unstoppable force.

Although they’ve had their differences over the years, there’s still a lot of mutual respect. The current Derby boss responded to Ronaldo’s two-word comment during a pre-match press conference.

He said: “There probably isn’t a football player on the planet that isn’t jealous of Cristiano [Ronaldo]. The career he’s had, the trophies he’s won, the money he’s earned…the six-pack. I think every player bar Lionel Messi is jealous of Cristiano.”

Football fans know all about Ronaldo’s rivalry with Messi over the years in an attempt to become established as the world’s greatest footballer. So there may be a subtle dig in there, too – but Rooney certainly appreciates the immense talents of his former team-mate.