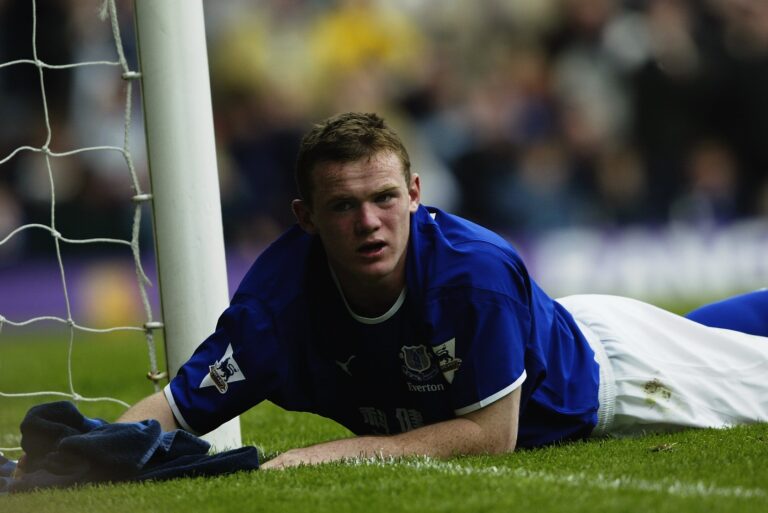 Wayne Rooney has said in an interview that he was forced out of Everton in the summer of 2004 – and had to write a transfer request on a napkin in order to join Manchester United.

Rooney graduated from the Everton academy in 2002 and quickly became recognised as one of the world’s breakout stars.

In October of that year, he scored a memorable last-minute winner against reigning champions Arsenal (“remember the name…”), becoming the youngest goalscorer in Premier League history.

At the age of 17, he was called up to the England squad in February 2003, and scored his first international goal against Macedonia in September.

By the summer of 2004, he had lit up Euro 2004 with England, ending the tournament as joint second top scorer with four goals.

In June of that year, Toffees chairman Bill Kenwright said: “[Everton manager] David Moyes and I agreed Wayne has to be a £50m player now.

“I would turn down any bid for him and say: ‘Thank you very much. What else do you want to talk about?’

He continued: “I am not here to sell my best players and Wayne wants to stay. Wayne will continue at Everton.”

By the end of the transfer window, however, Rooney had joined Manchester United for a fee of £27 million – making him the most expensive teenager in world football at the time.

Rooney speaks out on Everton transfer

Rooney has now claimed, speaking on the ‘Tony Bellew Is Angry‘ podcast, that “certain individuals” had enquired to other clubs about the possibility of selling him for £30m.

He also claimed that he was pushed to sign for Chelsea because they offered more money, but wanted to join United – and was told the only way he could was if he handed in a transfer request.

Rooney – who rejoined Everton for a second spell in 2017 – explained: “Certain individuals were going into other clubs saying ‘would you take Wayne Rooney for £30m?’

“I was getting pushed to go and play for Chelsea because they offered the most money, but I said ‘you’re not dictating where I go – I want to go to Manchester United’.

“But I got told the only way you’re going to Man United is if you put a transfer request in. This was in Moyes’ office.

“So I went into the canteen and wrote ‘I Wayne Rooney request a transfer from Everton Football Club’ on a napkin, or something! Walked back into Moyes’ office and said, ‘there you go’.

“I felt I got backed into a corner to a certain extent, but that’s football.”