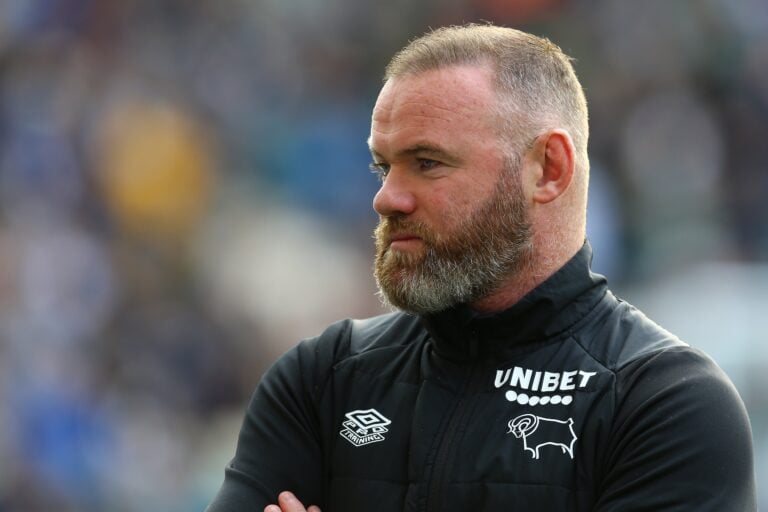 Manchester United‘s all-time leading goalscorer Wayne Rooney has said that the club’s current players need to look at themselves following their 5-0 defeat to Liverpool on Sunday.

United were humiliated at Old Trafford by their great rivals, with Jurgen Klopp‘s side going into the half-time interval 4-0 up.

Mohamed Salah went on to make it five in the second half – completing his hat-trick in the process – before Paul Pogba was sent off for a shocking tackle on Naby Keita to reduce United to 10 men.

United manager Ole Gunnar Solskjaer has come in for heavy criticism since the defeat, and there have been question marks about his future at the club. For now, he is set to remain in the post – but he does need to turn around his side form quickly.

Rooney, who currently manages Championship side Derby County, says that it is “too easy” for the manager to take all of the blame, and believes the players need to look at their own performances as well.

He explained: “The players have to look at themselves. It’s too easy for the manager to take all the stick when those players are being paid a lot of money to do the job and I don’t think they’re doing it well enough.”

“There is a big responsibility on them. They are world-class international players and a club like United need more. Those players need to feel hurt when they lose games.”

“There are high demands at that club, high pressure, and I’m seeing too many players not willing to run back, defend and put everything on the line. That’s not acceptable. Are you telling me that’s the manager’s fault or the players’ fault? I don’t know.”

He went on to add: “Liverpool are a fantastic team, similar to United in terms of the world-class players they have, and they probably have the best in the world at the minute in Mohamed Salah. But the only difference is they are working off the ball. At Derby, my players know they won’t play if they don’t work hard enough. There is no excuse not to work. It’s the first thing I said to the players when I took the job.”

United are next in action on Saturday when they take on Tottenham Hotspur in the Premier League. It is one of three games Solskjaer has reportedly been given to convince club chiefs that he should remain in his role as manager.