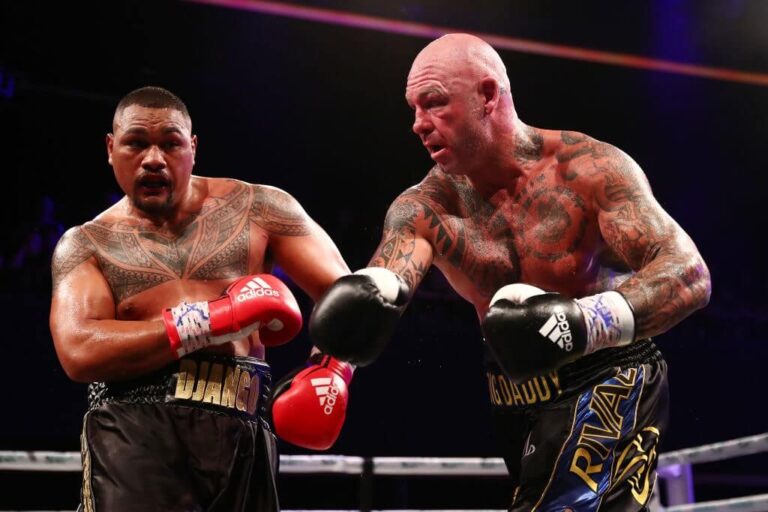 On Saturday, Lucas Browne returned to winning ways with an incredible comeback victory.

The Australian was priced as a huge underdog when he stepped into the ring with Faiga “Django” Opelu. But ‘Big Daddy’ made a mockery of those odds by stopping his opponent with a crushing seventh-round knockout.

The former heavyweight champion of the world was coming into the contest off the back of a shock loss to former NRL star Paul Gallen. It seemed the glory days of the Aussie boxer were in the rearview mirror. Many pundits assumed that a loss in his next contest was inevitable, but Browne had other ideas.

The Australian started slowly and struggled to evade his Samoan opponent’s laser-like jab. However, as the bout continued, Opelu faded, and Browne grew into the fight. By the seventh round, the 5ft11 heavyweight looked shattered, and ‘Big Daddy’ was ready to let his explosive hands fly.

He used his superior size and experience to pin his opponent to the ropes as he prepared to unload a barrage of shots. Browne put his punches together as if his life depended on it. He knew in his heart that only a win would be good enough to continue his career. The Australian was desperately searching for a punch reminiscent of the one he landed on his greatest night in Chechnya.

Opelu slowly began to wilt as he struggled to deal with the ferocious bombs coming his way. Then suddenly, an enormous left hook landed and rendered the Samoan unconscious, leaving the Brisbane crowd speechless.

The 6ft 5in giant has reached the highest highs and hit the lowest lows in his boxing career. In 2016, Browne achieved one of the biggest upsets in heavyweight history.

Having only taken up boxing at the age of 30, the former bouncer was not expected to achieve much in the sport. But his formidable power and desire to be the best slowly saw him rise to the elite level.

He found himself ranked as the number one contender in the WBA, meaning he’d earned a shot at the world title. However, ‘Big Daddy’ had a challenging task ahead of him. He had no choice but to travel to Russia to take on renowned heavyweight king, Ruslan Chagaev.

Browne boxed well, but by the fifth round, it seemed he was out of his depth. The reigning champion landed a massive left hand to send the Australian crashing to the canvas. The 42-year-old got up, but Chagaev appeared to be in total control.

It looked as if it would be a routine victory for the Uzbek boxer. But in the tenth round, Browne landed a monstrous right hand, which sent Chagaev tumbling towards the floor. He rose to his feet, but an onslaught of massive shots forced the referee to end the contest.

However, what followed had a damning effect on his career. The Sydney native tested positive for a performance-enhancing substance in 2016, two weeks after the Chagaev fight. He was stripped of the belt and given a six-month suspension, but was later exonerated by the WBA and cleared to fight again.

Browne then failed a second drugs test in November of the same year. However, he claimed he never intentionally took a banned substance.

He told ESPN: “I was preparing for the Shannon Briggs fight. I was on a supplement and if you take it for a long period of time, it stops working.”

“So I got an over-the-counter supplement but on the label, it didn’t give the specific ingredients.”

“It looks like I’m a two-time cheat, but I’m not. I’ve done hair follicle and lie detector tests to prove that I’m not. It absolutely left me in limbo, but I’m a clean athlete.”

He eventually faced Dillian Whyte in March 2018 after beating Matthew Greer in his return fight. However, the ‘Body Snatcher’ stopped him in the sixth round with a massive left hook.

What does the future hold for ‘Big Daddy’?

Despite being written off time and time again, Browne keeps finding a way to claim the win. His victory on Saturday, in which he won the WBA Oceania Title, was synonymous with his entire career. The Aussie always keeps trying, no matter how far behind he is on the cards.

There are plenty of options on the table for the Australian, including a contest with Eddie Hearn-promoted fighter Alan Babic. Browne could even entertain a domestic super-fight with Alex Leapai.

However, is it necessary for ‘Big Daddy’ to continue competing?

The 42-year-old has overcome an extreme amount of adversity to be in the position he is today. Even though boxing has at times been unkind to him, his fire has never stopped burning.

His performance at the weekend was a testament to the power of dreams. When everybody else has dismissed him, he’s never stopped believing.

Browne may fight on, but this could be the perfect opportunity for him to retire and finish his story with a fairytale ending.