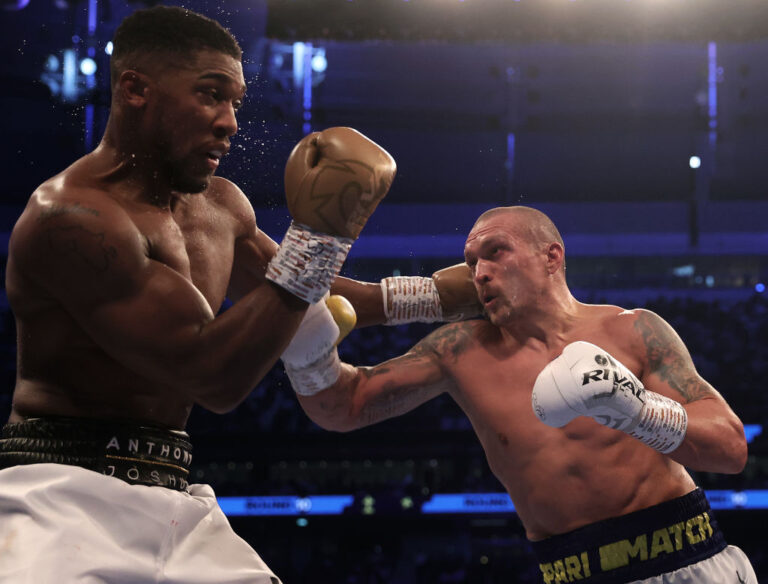 It has been confirmed that Anthony Joshua and Oleksandr Usyk will take each other on in a rematch – and we have all the details you need to know, including what time they will likely fight.

Boxing fans have eagerly anticipated the second clash between the pair for many months.

Usyk produced one of the finest victories of his career last September, beating Joshua via unanimous decision in London. In doing so, he won the unified heavyweight title belts.

The Ukrainian dominated much of the fight, and one judge even awarded him victory by five points. Attention soon turned to Usyk’s next challenge – which was rumoured to potentially be Tyson Fury.

But boxing – and world affairs – have both changed dramatically since then. Usyk’s home country was invaded by Russia, and he put his sporting life on hold to fight for Ukraine.

Meanwhile, Fury defeated Dillian Whyte at Wembley in April – and promptly retired from professional boxing. The ‘Gypsy King’ then appeared to rule out a future fight against Usyk.

All focus, therefore, is on the Ukrainian’s rematch with Joshua. It promises to be a classic, with Joshua eager for revenge, and Usyk keen to cement his position as champion. Here is all you need to know:

When will Joshua and Usyk fight?

Hearn said: We are thrilled to get one of the biggest heavyweight rematches in boxing history made, and give Anthony Joshua the chance to reclaim what he lost last September.

After months of speculation, it has been announced that Usyk v Joshua 2 will take place at the Jeddah Super Dome in Saudi Arabia.

It will be the second time Joshua has fought in Saudi Arabia. In December 2019, he defeated Andy Ruiz via unanimous decision in a boxing clinic to regain the heavyweight titles he lost six months earlier.

Meanwhile, this will be Usyk’s first fight in Saudi Arabia.

What time will Joshua and Usyk fight?

Although an official time for the fight has not yet been confirmed, we can base it on Joshua’s previous fight in Saudi Arabia.

His bout against Ruiz began at 4pm UK time, with the ring walks commencing at around 3:30pm. Therefore, we can expect a similar time frame for Usyk v Joshua 2.

What is the prize money on offer for both fighters?

It is being reported that both fighters could earn an eye-watering £100 million for participating in the fight.

The Daily Mail is reporting that whilst Joshua took home most of the purse from their first fight – despite being on the losing side – this fight is expected to be far more equal. In fact, the same report claims that Usyk, as champion, could take over 50 per cent.