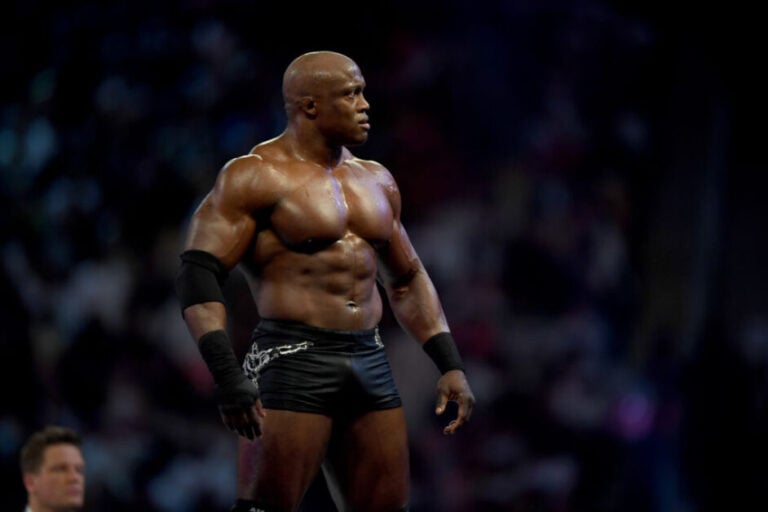 Of all the jaw-dropping moments Bobby Lashley has given us over the years, his steel cage dive against Umaga in 2007 might be the best.

That said, it’s not like Lashley has been living off his past. At age 45, the three-time wrestling national champion looks primed to have a massive 2022. He kicked the year off by defeating Big E, Kevin Owens, and Seth Rollins in a fatal four-way match.

Lashley’s late-career renaissance started with his WWE comeback in 2018. Now, The Dominator has the chance to put the cherry on top of his return to the ring.

On January 29, he will challenge champion Brock Lesnar for the title at Royal Rumble. It will be a special event for Lashley fans, devoted to his idiosyncratic wrestling style and outside-of-the-ring antics since 2005.

A fan-favourite for almost 20 years, Lashley is one of the most charismatic wrestlers on earth. The Dominator’s extraordinary physique and fighting stunts complement one of the most bellicose personalities in the WWE.

From Rusev to Goldberg, Lashley has been involved in dozens of feuds throughout his WWE career. His comeback has proved to be a fiery one, with Lashley constantly taking shots at Drew McIntyre.

The Dominator would finally get a chance to fight the Scot last June, defeating him at Hell in a Cell to retain the Championship. It was a strange bout, with a referee getting injured and MVP interfering several times during the fight.

But none of Lashley’s recent feuds has been as intense -and bizarre- as his beef with Umaga. Let’s rewind to April 2007, when, representing a certain Donald Trump, Lashley faced Umaga, acting as Vince McMahon’s spirit wrestler.

Trump and McMahon had been beefing for a while, and they decided to settle things in true billionaire style: Hiring someone else to fight for them.

Initially, fans saw Umaga as a mere pawn in the larger Lashley vs McMahon rivalry. But before The Battle of the Billionaires bout took place, Lashley and Umaga raised the stakes by starting a personal feud.

It was February 2007, and Lashley was defending his ECW title. Fighting inside a steel cage, Lashley had five minutes to defeat Hardcore Holly.

Suffice to say, The Dominator comfortably knocked Holly out well before the five-minute deadline. Once the fight was over, things started to get wild.

Umaga, enraged after Lashley’s win, was blowing a fuse and taunting The Dominator to come after him. Only one thing stood between both wrestlers: a steel cage.

It’s simply one of the most spectacular moments in wrestling history.

Taking impulse from the other side of the ring, Lashley busts through the cage and crashes onto Umaga, leaving everyone in the audience completely horrified.

Lashley’s humiliating slam gave his coming bout with Umaga personal spice. Both wrestlers would face each other only a few weeks after the steel cage incident, with The Dominator spearing the late Umaga to claim the victory at WrestleMania 23.

After Umaga’s defeat, McMahon shaved his head bald, as previously agreed with Donald Trump. Lashley’s feud with the executive would continue, with a three-on-one handicap match seeing Lashley lose a few weeks after The Battle of the Billionaires.

However, The Dominator would take his revenge. In June 2007, he reclaimed the ECW World Championship after defeating McMahon with a trademark spear.