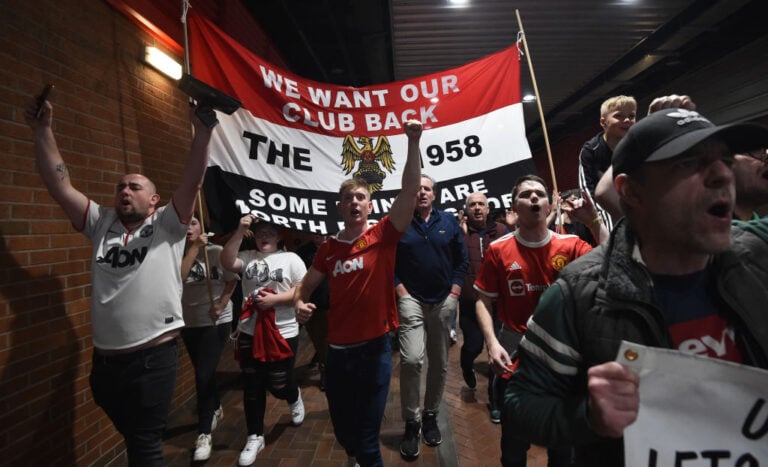 In an attempt to finally rid The Glazers from Old Trafford, a Man United supporters group has started a ‘boycott Adidas’ campaign.

Since the Glazers purchased ‘The Red Devils’ in 2003, they’ve developed a frosty relationship with the fans who view them as leeches for their leveraged buyout and clear business agenda. Many believe they have no genuine interest in football. After all, it took Joel Glazer two years just to learn the offside rule.

The family take massive money out of the club without putting much back in and often fail to bring in the correct players. Although they appear to back the team by securing the signature of big-name stars, this is viewed as a calculated approach.

Rather than signing the players the manager needs to strengthen his side, they pick the men who will do the biggest business in shirt sales.

Furthermore, in 2020, The Athletic reported that The Glazers’ ownership had cost United a whopping £1.5 billion in interest, debt and other outgoings.

And to make matters worse, during that same period, they’ve taken around £200 million from the club.

Therefore, it comes as no surprise that the diehard fans want them out. Supporters regularly grace The South Stand with huge banners that beg for their owners to go. They also stage raucous protests outside Old Trafford. But as of yet, nothing has worked. However, perhaps their most recent strategy will capture The Glazer’s attention.

Man United fans boycott Adidas to get rid of The Glazers

With all else failing, The 1958 fan group have ramped up the pressure on their American owners. They’ve started a #boycottAdidas trend on Twitter. Each week the group will call on fans to cause havoc towards a United stakeholder.

They said: “Calling all reds. Tonight we launch our worldwide cyber campaign against the Glazer stakeholders. Each week we’ll be focusing on one Stakeholder at a time and posting two easy tasks every few days that week. This week we start with: Adidas. Do your bit, save your club.”

They aim to reduce the effectiveness of the stakeholder’s advertising budget and create an adverse brand perception with the methods of exactly how they’ll do that explained in the tweet below.

Of course, the majority of United supporters share the same goal, so they’ve taken to Twitter to offer the group a considerable amount of support.

While another suggested: “How about a protest outside the Adidas store on Market Street?”

Even a non-fan stood up for the cause: “I do not support Manchester United, but I stand with the Man United fans for this cause and will support #Glazersout, and I will #BoycottAdidas.”