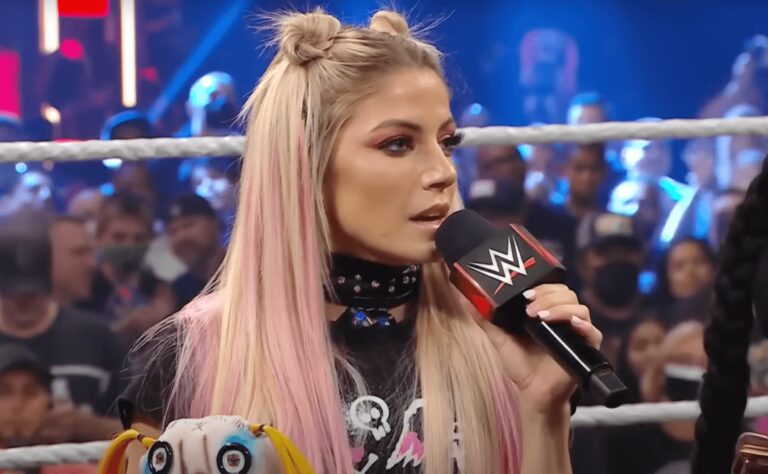 The latest episode of WWE Raw saw Alexa Bliss take on Bayley in the main event, with the leader of Damage CTRL picking up the victory.

It was an entertaining 15-minute match, culminating in Bayley hitting her finisher after Bliss was pushed off the top rope by Dakota Kai and Iyo Sky.

Afterwards, Damage CTRL launched a post-match beatdown on Bliss, before Asuka interrupted and made the save. But Sky hit an assisted moonsault on the former Raw Women’s Champion.

The current title holder, Bianca Belair, then launched an assault of her own, but was overwhelmed by the three Superstars. Bayley then hit ‘The EST’ with the Rose Plant. She closed out the show by challenging Belair to a title match at Extreme Rules.

The WWE Raw main event was also notable for the commentators making several references towards Alexa Bliss and her current character.

Bliss made her return to Raw in April, and feuded with the likes of Sonya Deville and Doudrop. Now, she is part of the six-woman programme involving Damage CTRL, Asuka and Belair.

During an earlier promo, Bayley called out her rival, claiming: “You used to make my life a living hell. But that was back in the day. I don’t know who this is. You’re like a shell of the old Alexa.”

And during the match that followed, the commentators discussed her past strengths in WWE. Corey Graves even referenced her old gimmick, ‘The Goddess’.

At one point in the match, the lights in the arena went out for a brief moment, although it is unclear whether this was planned or simply a technical fault. If planned, it could have been a reference to Bliss’s previous darker gimmick that she utilised previously.

Either way, it appears that WWE are at least hinting that a change might occur soon for the five-time Women’s Champion.