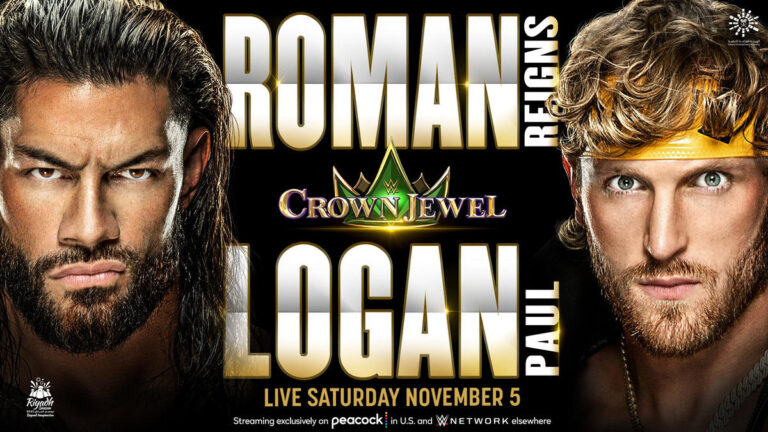 WWE Crown Jewel goes down this weekend with Roman Reigns taking on Logan Paul, and we’ve got all the details, including the UK start time.

Since his rocky start to life in the world’s premier wrestling promotion, ‘The Big Dog’ has cemented his place as the greatest superstar of his era. His thunderous power and terrifying aura have seen him put together an 800-day run as champion, in which he’s conquered future Hall of Famers such as Brock Lesnar and Drew McIntyre.

However, the 37-year-old hasn’t come up against anyone quite like Paul. ‘The Maverick’ may not come from a traditional entertainment background, but he’s certainly caught the fans’ attention since his debut at Wrestlemania.

The YouTube sensation has utilised his wacky persona to amass over 23 million subscribers, making him one of the best-known celebrities on the planet. However, he’s more than just a social media star. The 27-year-old wrestled at a high level in college and possesses unheralded skill for a man of his experience.

Whether they like him or not, the WWE Universe watched in awe as Paul showcased his talent at SummerSlam. Therefore, fans can’t afford to miss his eagerly-anticipated clash with ‘The Tribal Chief’.

Life for a British wrestling fan isn’t easy. We’re all used to setting our alarms for the early hours of the morning to watch our heroes take to the ring. But luckily, due to the event taking place in the Middle East, we’re going to get an event at prime time.

The card is set to start at 4 PM, with the main event scheduled to commence at 9 PM.

How to watch WWE Crown Jewel

In order to watch Reigns and Paul go to war, wrestling enthusiasts will have to depart with their hard-earned cash. The PPV costs £19.99 via BT Sport Box Office, or alternatively, fans can subscribe to the WWE Network for a monthly instalment of £9.99.

While most are tuning in for the main event, there’s a plethora of match-ups for wrestling heads to get their teeth sunk into. In what should make for an epic collision, Brock Lesnar goes toe-to-toe with Bobby Lashley. In addition, Drew McIntyre looks to settle his grudge with Karrion Kross once and for all.