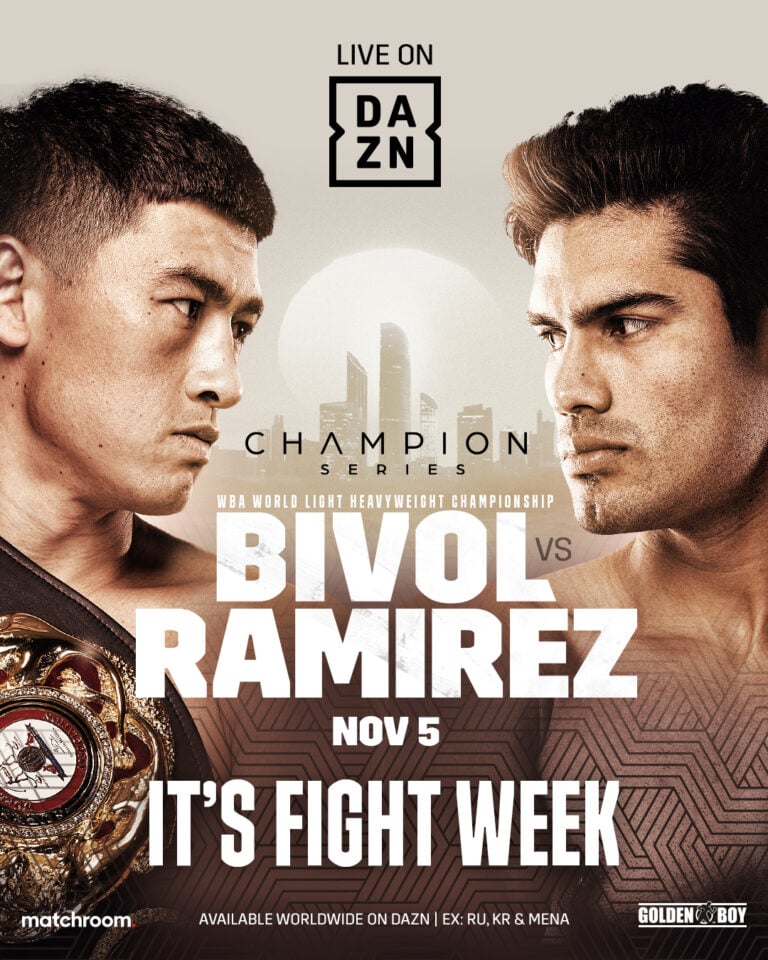 On November 5, Dmitry Bivol goes toe-to-toe with Gilberto Ramirez in one of the biggest fights of the year, and we’ve got everything you need, including the UK start time.

Earlier this year, the Russian shocked the world with his incredible upset victory over Canelo Alvarez. Bivol utilised his supreme boxing IQ and mesmerising shot selection to school the pound-for-pound great en route to a comprehensive decision victory. And rather than take an easy fight before jumping in with Artur Beterbiev for the undisputed titles, the 31-year-old has opted to take on the best available opponent.

Back in 2016, Ramirez dismantled the legendary Arthur Abraham to claim the WBO Super Middleweight world title. But after showing so much potential, his promoter, Bob Arum, failed to get him the big fights. Therefore, after making five underwhelming defences of his belt, he left Top Rank and decided to move up a weight class.

Standing at 6 ft 2, the southpaw proved he had the size to compete in the division with victories over the likes of Jesse Hart. But now six years removed from his first world championship, the boxer, who has amassed an incredible record of 44-0, wants to prove his place among the elite, making this a match-up fans can’t afford to miss.

The eagerly-anticipated event, which will take place at Etihad Arena in Abu Dhabi, will go down at prime time in the UK. Fans can watch the action from 5 PM, with the headline attraction expected to commence at 10 PM.

How to watch Dmitry Bivol vs Gilberto Ramirez

Fight sports enthusiasts can watch every second of the evening’s entertainment via DAZN. The streaming service costs £7.99 per month.

While most fans are tuning in for the main attraction, there are a plethora of other fights on the bill to watch out for. In the co-main event, Shavkatdzhon Rakhimov clashes with Manchester Zelfa Barett for the IBF Featherweight title. The Tajikistani enters the contest as a clear favourite, but the Englishman believes he can use his thunderous power to pull off the upset.