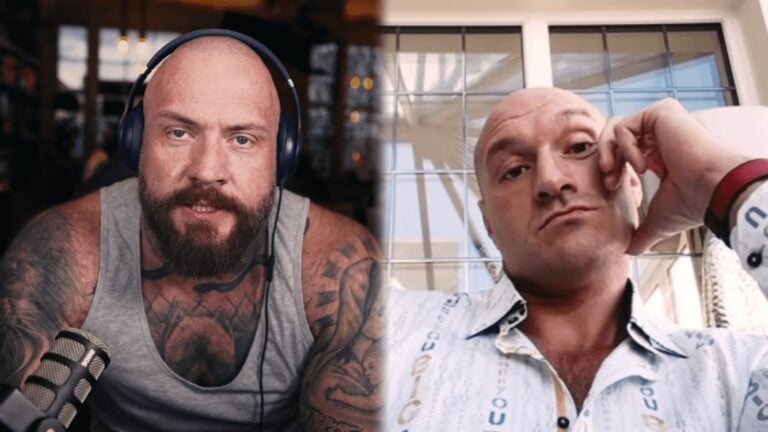 Tyson Fury branded True Geordie a “t*sser” after the YouTuber took him to town over his controversial third bout with Derek Chisora.

Just over a month ago, the boxing community united in the hope of finally getting to see the mega-fight between ‘The Gypsy King’ and Anthony Joshua.

However, as is often the case, they were rendered gutted when the pair decided to go in different directions.

But while AJ looks likely to wait until 2023, Fury has confirmed that he will return on December 3 against a man he’s already beaten twice.

While a popular figure, Chisora, has lost three of his last four, including a battering against Joseph Parker.

Despite being a massive fan of the WBC Champion, the Newcastle-born content creator couldn’t withhold his opinions.

After explaining that Chisora didn’t deserve the opportunity due to losing 50% of his last 15 fights, Fury went berserk.

He said: “No matter what you say, or what people like you want to say about Derek Chisora, he’s achieved more in boxing and in fighting than ten men like you could ever achieve.

“So I’m not going to just let you sit here and slate somebody who’s fought the best fighters of this era just because he’s lost a few fights.

“It is what it is. I’ll be fighting Chisora. If you don’t want to watch it, then please don’t, and if you do, tune in.

“If you don’t want to buy a ticket, don’t buy a ticket. And if you do, be like the rest of the 50-odd, 60-odd thousand that’s already bought tickets.”

Finding the situation amusing, the social media star chuckled before asking Fury if he was having issues ending the video call, to which the boxer replied: “Suck a d*ck.”

After regaining his composure, the boxing fanatic concluded: “Well, that went well.

“Have you ever been cussed out by the heavyweight champion of the world? Probably not.Very glad I did this one on video call because that could’ve been a painful end to my life.”