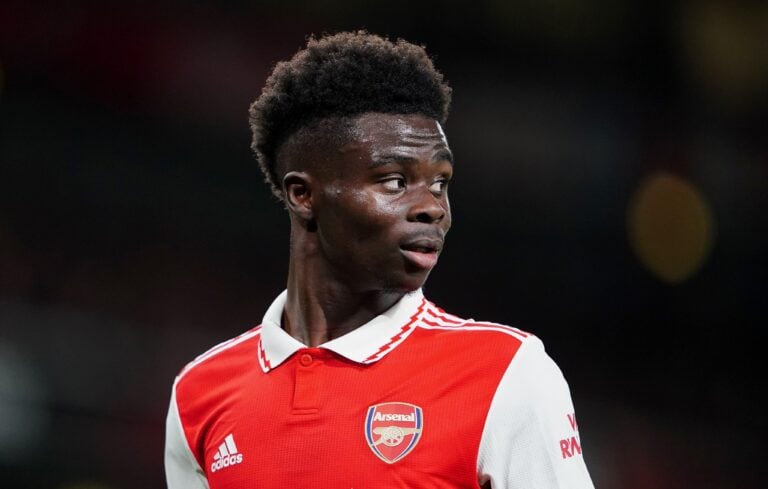 Mikel Arteta is confident that Bukayo Saka will feature for England at the World Cup, despite sustaining a leg injury against Nottingham Forest.

After narrowly missing out on Champions League action last season, Arsenal have started the 2022-23 campaign with a vengeance. ‘

The Gunners currently stand atop the Premier League table and don’t look like slowing down anytime soon.

However, despite claiming a 5-0 victory over Nottingham Forest, the London club were rendered disappointed when their star forward had to leave the pitch.

Saka suffered a number of kicks to the leg, including a crunching challenge from Renan Lodi, which resulted in medical staff having to treat him.

And, despite attempting to play on, Reiss Nelson replaced the winger after 27 minutes.

Consequently, with Gareth Southgate needing to select his final squad by November 13, fans have started to worry that Saka will fail to make the cut.

But Arsenal manager, Arteta is optimistic that the youngster will recover in time to play in the prestigious tournament.

Read: Gabriel Jesus reacts to being left out of the Brazil squad (sporf.com)

Football enthusiasts will know more about the extent of the damage when the results of the scan return next week. However, the Arsenal manager doesn’t appear too concerned.

When asked whether Saka will miss the eagerly-anticipated competition, as per The Guardian, he replied: “Hopefully not.

“It was a bad kick right from the beginning and he was limping. But I didn’t see anything further than that, so let’s see how he is in the next couple of days. I think he got kicked a few times,” he continued.

England will begin their World Cup campaign on November 21 against Iran, in a game the Saka will hope to make his mark in.

The group also features the USA and fierce rivals, Wales. And after missing a penalty in the European Championships final, Saka is desperate to redeem himself.