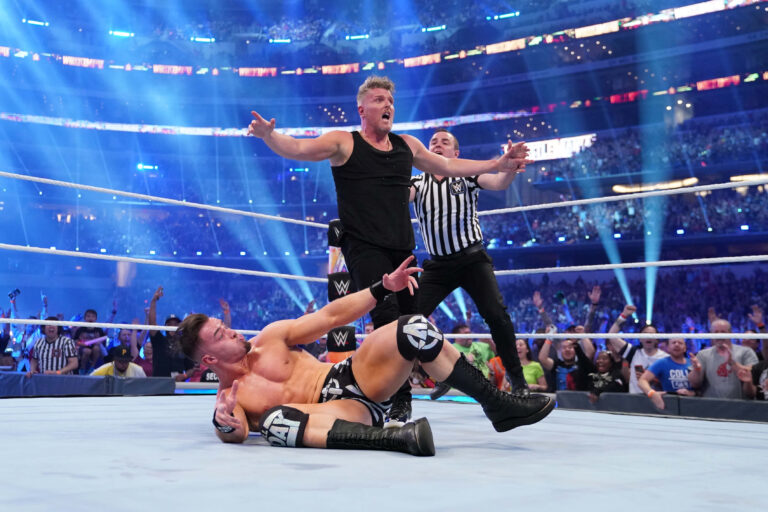 Pat McAfee has recently enjoyed one of the finest nights of his WWE career.

The hugely popular WWE commentator lit up WrestleMania 38 with his superb performance against Austin Theory.

McAfee launched into an ultimately unsuccessful senton bomb, landed a superplex from the top rope and displayed his athleticism on many other occasions throughout the match.

To cap off an incredible night, McAfee then rolled up Austin Theory to secure the pinfall victory – his first at WrestleMania. He then became the first Superstar in 12 years to face WWE chairman Vince McMahon in a competitive match.

McAfee would unsurprisingly lose the clash, but if anything, it surely only added to the experience. He then took a Stunner from ‘Stone Cold’ Steve Austin – something he admitted took him by surprise.

WWE fans were delighted at the display that McAfee was able to produce on the grandest stage of them all, given his relative lack of wrestling experience. But the commentator did make several memorable – and successful – appearances in NXT back in 2020.

In 2020, Pat McAfee was joined on his podcast, ‘The Pat McAfee Show‘, by then-NXT star Adam Cole.

One thing led to another, and McAfee took on Cole in a singles match at NXT Takeover in August of that year. The former NFL player lost via pinfall. However, fans once again marvelled at the quality of his wrestling.

McAfee performed a diving senton bomb from the top rope to the outside of the ring at one point. He also landed a superplex, as he did against Austin Theory at WrestleMania.

However, that wasn’t to be the end of McAfee’s in-ring career in NXT. He and his team took on Cole and The Undisputed Era in a WarGames match in November. McAfee landed his now trademark diving senton bomb from the top of a steel cage. The commentator once again earned acclaim for his performance in the match.

Although the match brought a close to his spell in NXT, WWE reportedly had plans to further McAfee’s time with the brand.

After his spell-binding performances for the yellow brand, WWE began to have serious discussions about McAfee’s future. Their faith and belief in the former NFL star were both shown by them trusting him with the penultimate match on a WrestleMania card, and an in-ring spot with Stone Cold.

Sports Illustrated report that after the WarGames match in 2020, WWE had “serious internal discussion” about bringing McAfee back to team up with a new mystery partner.

They claim that the partner in question was none other than NFL star Aaron Rodgers. The 38-year-old is a regular on McAfee’s podcast, so the idea certainly makes a lot of sense.

During his time in the NFL, Rodgers became only the fifth player to win the league’s MVP award in consecutive seasons.

Overall, he has four MVP awards to his name, most recently earning the accolade in 2021. In addition, he is second in the NFL’s all-time regular-season passer rating list.

In 2019, NFL analyst Elliot Harrison named Rodgers the 10th best quarterback in NFL history. He also has one Super Bowl title, which he won in 2011. Rodgers also received the Super Bowl MVP award in the same year.

There is no doubt that the addition of Rodgers to the roster, even for a brief period, would have provided a serious boost to viewing numbers for NXT. However, it ultimately never materialised. There is no reason given as to why, but with Rodgers still an active NFL player at the age of 38, that is something fans will hope we could maybe see further down the line.