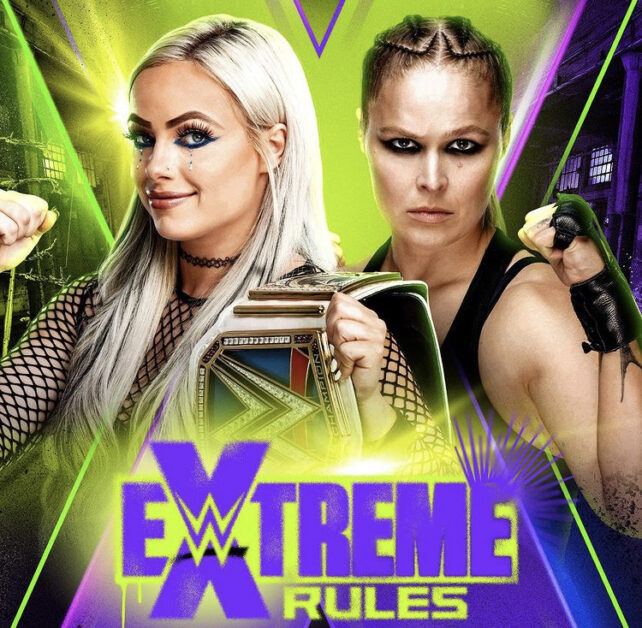 WWE Extreme Rules goes down this weekend, and to guarantee you don’t miss a second of the action, we’ve compiled all the details you need, including the UK start time.

Every year, the world’s premier wrestling promotion leaves fans speechless with the most savage PPV event on the calendar. The WWE Universe watches on in his awe as the warriors in the ring push themselves beyond the realms of the normal man by launching each other through tables, inflicting brutal blows with steel chairs and diving from the top rope towards their opponent on the announce table.

In the main event, Liv Morgan and Ronda Rousey will settle their differences in an ‘Extreme Rules’ match, where essentially, anything goes. After losing the belt to her rival at Money in the Bank, the former UFC Champion will do whatever it takes to reclaim her prized possession.

But her opponent won’t surrender the strap easily, making this an encounter that fans can’t afford to miss. And to ensure you’re glued to the seat from the first bell, we’ve got all the details you need.

Although Clash at the Castle made for a welcome change, it’s back to basics this weekend; that’s right guys, you’re going to have to do the night shift as the main card doesn’t start until 1 AM on Sunday, October 9.

Therefore fans will have to stock up on all the energy drinks they can buy so they don’t nod off before the main attraction.

How to watch WWE Extreme Rules

Those wanting to witness the event, will have to pay £19.95 via BT Sport Box Office. Fans can access Extreme Rules via Sky Channel 494, while Virgin Media users have to head to the ‘Live Events’ section of their Tivo box, before following the on-screen instructions.

Alternatively, wrestling enthusiasts can sign up to the WWE Network and stream the event for a monthly subscription price of £9.99.

While the main event looks guaranteed to set pulses raising, there’s a plethora of undercard contests that will undoubtedly provide unmissable action. Firstly, Edge collides with Finn Balor in an ‘I Quit’ match, in which ‘The Rated R Superstar’ will look to do a serious number on the man who has spent the last few months making his life a misery.

In addition, Matt Riddle and Seth Rollins will write the next chapter of their legendary feud. But they’ll have to be careful as former UFC champion, Daniel Cormier, has stepped up to referee the match.

Furthermore, fans can’t wait for Drew McIntyre’s strap match with Karrion Kross. And after his nemesis cost him the title in Cardiff last month, the Scot wants revenge.