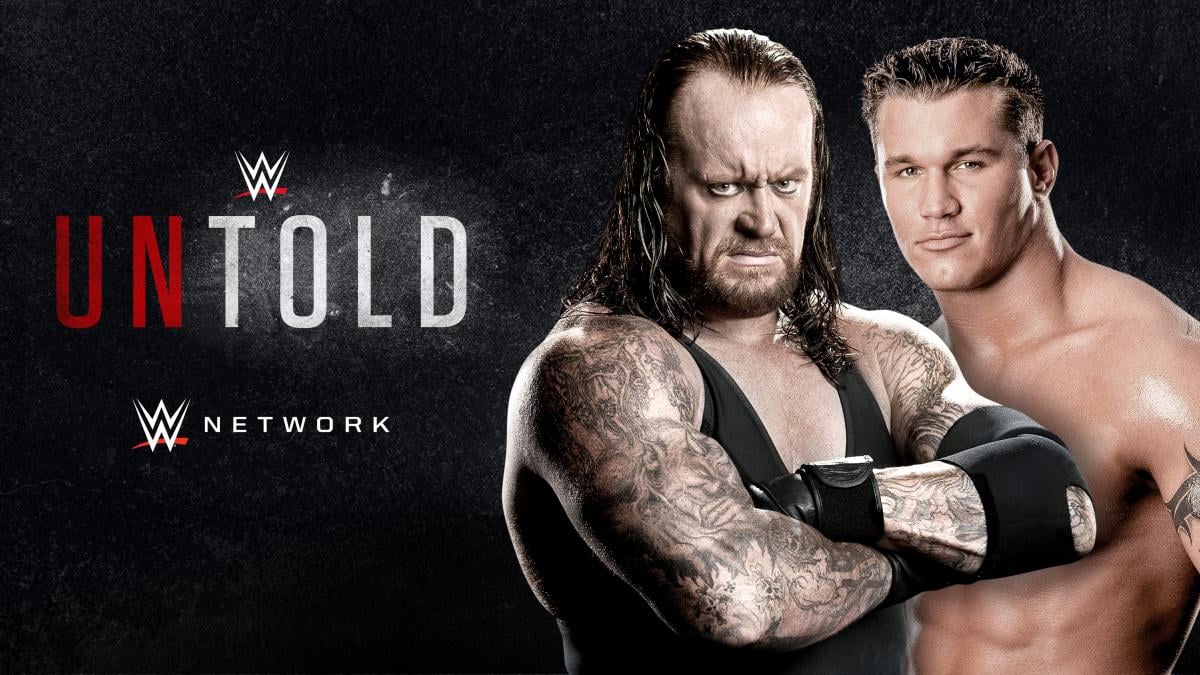 Before we get into the review of another excellent documentary from WWE, I want to quickly dive into a side story. A lot of people, myself included, have hoped, have prayed, have demanded that The Undertaker hang up his boots and retire from in-ring performance.

We like to make jokes about how The Undertaker will make a comeback at some point. But if there’s one thing you’ll take away from WWE Untold: The Legend Killer and The Phenom, it’s how much ‘Taker loves wrestling.

And I mean loves it.

From the tone in his voice, to the energy in his answers, to the glint in his eyes. The Undertaker’s pure and unadulterated love for the squared circle will put a smile on your face.

But into the show.

I feel like this documentary was made with the Internet Wrestling Community.

The opening line is:

“This story is so much better if I’m honest.”

WWE Untold: The Phenom and The Legend Killer is the story of Randy Orton and The Undertaker’s incredible feud from Wrestlemania 21 in March 2005, all the way through to Armageddon, in December of the same year.

When we think of the early days in Orton’s career, we often think of his time in Evolution as the catalyst of illustrious rise up the card. And whilst the work Orton did with Triple H, Ric Flair, and Batista may have been the spark that lit the Viper’s career, this feud was the explosion that turned him into a star.

He talks about the physics of hitting someone with a chair, and how by being off by just two inches, he risked Taker’s safety.

He talks about how when they got to the back, he apologised profusely.

Then came The Undertaker’s response.

Flashback to the start of the feud.

At this point Orton is already ‘The Legend Killer’. He’s RKOing anything that moves, including his on-screen girlfriend Stacey Keibler whilst taunting The Undertaker whenever he can.

“I was back doing what I was comfortable doing, being a prick… I was back where I was happy, being a bad guy”

This crescendoed with Randy slapping the Undertaker, something that Taker was not going to let Randy half arse.

“That slap is what’s gonna set this whole thing off.”

Whilst Randy was unsuccessful in ending the Undertaker’s streak at Wrestlemania 21, it did introduce an important character to the storyline for the next 9 months.

The ref had been knocked down and down the ramp came Randy’s father, with his famous cast on his arm. He would cheap shot the Undertaker and, although we all already know the result, watching Taker kick out at two will still put a huge grin on your face.

I’ll spare you every detail of the next nine months of the feud, it goes to some weird places, that include a second Undertaker, Orton nearly setting himself on fire, and a lowrider with a flooded engine.

“So as a fan, there are these moments in storylines where you ‘Argh, I can’t go that far’ with you.’ But then if you pass that moment, and you go even further, and you go so far over the top, you’re going into terrain we’ve never seen before – you have to submit it to it and just go, “Ok, I’m onboard, let’s go, where is this gonna go?”

All that leads us to Armageddon, and a Hell in a Cell match.

If you ever end up in a Hell in a Cell match, firstly, congratulations.

.@WWE fans will learn A LOT from 30 years in the business that has given me so much. You’ll be able to check it out on @WWENetwork. https://t.co/hYKeT5WVPD

Secondly, rewatch this show, because there are some golden nuggets of wisdom imparted by Randy and Taker throughout this part of the show.

They discuss what to expect, what your face should portray, how violence is is a must.

But the bit that made me really, truly, genuinely pop, is when Randy Orton is discussing what Undertaker said to him as he was collapsed against the side of the cell.

The Legend Killer had an almost perfect response.

“Ok, what the f*ck? What am I supposed to do about that?”

If they’d finished the show there, I would have said that this was one of WWE’s best documentaries, but we get even more.

They go through the rest of the Hell in a Cell match which, at my count, had four people busted open.

But then we also get Randy Orton talking about how The Undertaker could have ended Orton’s push way back at Wrestlemania, and for good reason.

Six people were scheduled to appear at rehearsals before the show. The Undertaker, Randy Orton, Bob Orton, John Laurinaitis, Ricky ‘The Dragon’ Steamboat, and the referee, Mike Chioda.

Five people turned up, one person did not.

He missed rehearsal because ‘he got into some trouble and didn’t get a lot of sleep the night before.’

Taker could have ratted him out there and then.

“One of my biggest regrets in this business is letting you men down that night.”

Check out these incredible photos of the rivalry between The @Undertaker and @RandyOrton.

Then get the full story on #WWEUntold: The Phenom & The Legend Killer, kicking off 30 Days of The Deadman THIS SUNDAY on @WWENetwork. #Undertaker30https://t.co/BYr0JaufwV

At the start of this review, I spoke about how the one thing you should take from this documentary, is how much Taker loves the business. The second is how many parallels we can draw between The Undertaker’s work back then, and Randy’s work now.

Both pride themselves on helping the next generation of superstars get over, on doing, and I know it’s a cliche but forgive me, doing what’s best for business.

WWE Untold: The Legend Killer and The Phenom is available on the WWE Network from Sunday 25th October.