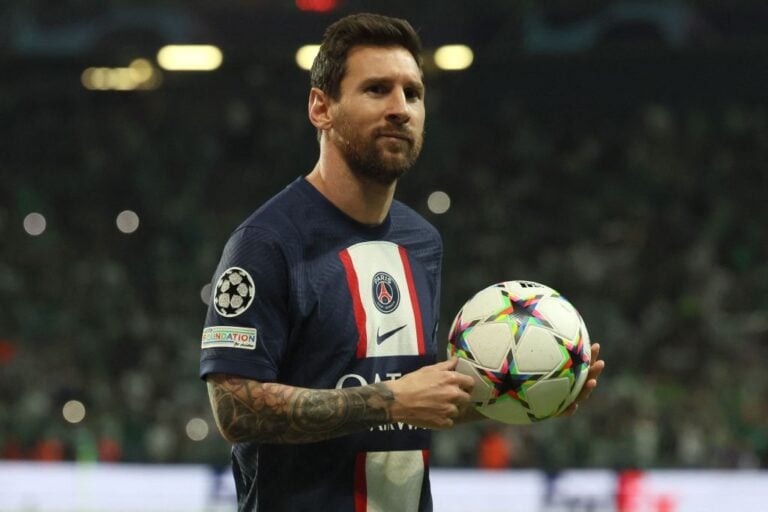 A group of mascots could not contain their excitement at meeting Lionel Messi before last night’s Champions League game.

The Argentine featured heavily during PSG’s visit to Israeli side Maccabi Haifa yesterday evening. This was the second matchday in Group H, with the Ligue 1 side looking to secure back-to-back wins following their 2-1 victory over Juventus last week.

Meanwhile, Maccabi Haifa hoped to get their first points of this UCL campaign. They lost to Benfica in Matchday one.

Before all the on-pitch drama, though, there was a feel-good moment as mascots greeted the PSG stars.

In footage shared online by DAZN, Paris Saint-Germain entered into the fiery Sammy Ofer Stadium atmosphere fully focused. However, a group of excitable youngsters may have broken their concentration.

As the French side prepared for the Champions League anthem and handshakes, a gaggle of excited football fans awaited them. The kids looked on in awe as the likes of Sergio Ramos, Marquinhos, and Donnarumma lined up behind them.

But the mascots all made a beeline for Lionel Messi. They rushed over to the PSG star, with some hugging the ever-popular player. Kylian Mbappe received some embraces, too, as the incredible encounter overcame the youngsters.

Once Lionel Messi and co stood for pre-match handshakes, the smiling Argentinian dished out some more high fives to the mascots. The whole scene was a heartwarming moment that will be an unforgettable experience for those fans.

During the game, Messi produced another vintage UCL performance.

The home side managed to take the lead against the run of play. Just after the 20-minute mark, a dangerous cross found Tjaronn Chery, who fired home to give Haifa an unlikely one-goal advantage.

Thirteen minutes later, though, PSG levelled. Kylian Mbappe’s twisting run caused confusion in the box as the hosts failed to clear his drilled cross. The ball eventually dropped to Messi, who slotted it into the net to give PSG an equaliser.

With the goal, Lionel Messi broke a pair of records. Haifa were the 39th different team that he has scored against – the most opponents against whom a player has found the net. Additionally, the Argentine became the first player to score in 18 consecutive Champions League seasons.

In the second half, PSG’s front three turned up the heat on Haifa, with Messi forcing the keeper into a pair of smart saves. Then, on 68 minutes, Les Parisiens finally made a breakthrough.

A perfectly weighted Messi pass played through Mbappe, who beautifully stroked the ball home. PSG now had control of the match, despite Haifa’s best efforts.

Not to be outdone, Neymar also made sure to get on the scoresheet. Marco Verratti’s lofted pass found the Brazilian, whose cool finish gave PSG a 3-1 win. The French giants stay top of Group H, although they will need to beat Benfica in matchday three to keep hold of that spot.

In contrast, Haifa will look to get a result against Juventus in the next matchday. Considering Juve’s poor start to this season’s competition, the Israeli side may fancy their chances.