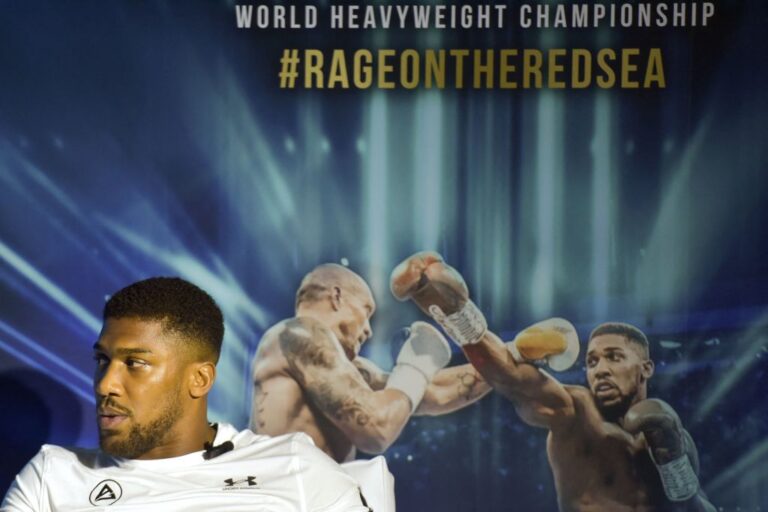 Anthony Joshua has received backlash for claiming he ‘doesn’t know’ what sportswashing is prior to his mega-money rematch with Oleksandr Usyk in Saudi Arabia.

On September 25, 2021, the two heavyweight sensations met in one of the biggest fights in recent memory. On paper, the Brit had the advantage in the power department while the Ukrainian clearly possessed superior boxing skills. And for eight rounds, the fight could have gone either way.

Usyk bossed large portions of the bout with his supreme footwork. But on several occasions, Joshua buzzed his opponent with his explosive right hand. However, the cream eventually rose to the top. From the ninth round onwards, the challenger began dismantling his significantly taller rival.

His mesmerising movement left AJ chasing shadows, and by the twelfth, he nearly had him out on his feet. When the final bell rang, the former undisputed cruiserweight champion lifted his hands in the air, knowing he’d conquered a second weight class. In contrast, Joshua, now the former champion, shook his head and made the long walk to the dressing room.

But on August 20, he has his shot at redemption. However, some fans have slammed the promotion for taking place in the Middle East.

Anthony Joshua claims he ‘doesn’t know’ what sportswashing is

In recent times, more and more sporting organisations have decided to take advantage of the money in Saudi Arabia. The WWE and F1 have put on events, and it isn’t Eddie Hearn’s first rodeo either.

However, many are concerned over the country’s human rights record, in addition to the murder of journalist Jamal Khashoggi in 2018. But Joshua doesn’t seem to care about any of those things.

When asked about the controversy hanging over the country at a press conference to promote his next bout, the ex-champion made an interesting claim.

He said: “I don’t know what that [sportswashing] is. I’m here to win the heavyweight championship of the world. I like Saudi. I think Saudi’s good. I’m having a good time here. I’m treated really well.

“All that allegation stuff, for me, I’m not caught up in any of that stuff. I’m here to have a good time, mix with the local people, bring entertainment to Saudi.”