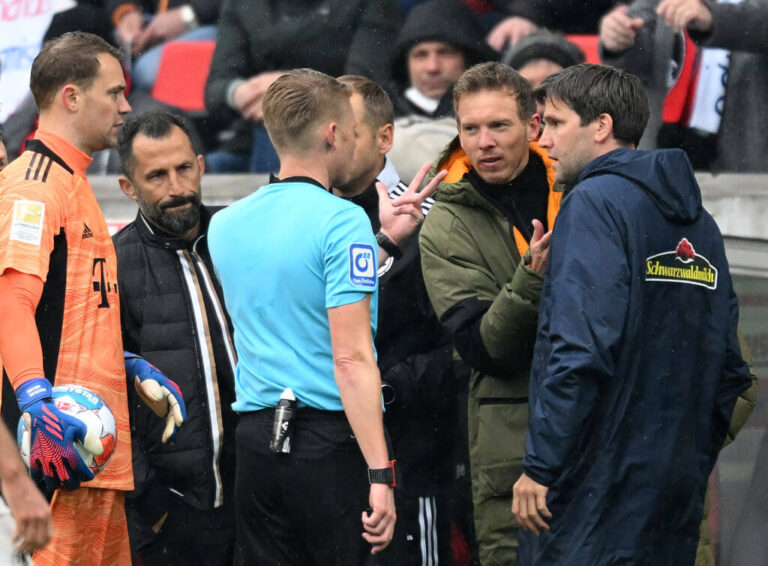 Bayern Munich enjoyed a tremendous 4-1 victory over Freiburg in the Bundesliga on Saturday. However, they could face a substantial punishment after playing a short period of the game with 12 men.

The German giants have recorded a whopping nine back-to-back Bundesliga title victories. They look likely to pick up their tenth with just six games left in the season and with a nine-point lead.

For nearly a decade, ‘The Bavarians’ have developed a reputation for operating at a high standard in every match they play. It’s seldom the case that they drop points. One of Bayern’s tremendous strengths is beating the teams in the lower reaches of the Bundesliga table.

However, against Freiburg, they made a vital error that could cause them huge issues.

By the 85th minute, Julian Nagelsmann‘s side had cruised to a 3-1 lead with goals from Leon Goretzka, Serge Gnabry and Kingsley Coman. The German giants needed to see out time. But there was plenty of drama to come.

Bayern Munich and the 12 men chaos

Their head coach, Julian Nagelsmann, decided to sub off Coman and Corentin Tolisso. However, in what appears to have been a miscommunication, only one player made the walk to the bench.

Two minutes later, VAR informed the officials of the problem and the match ground to a halt. This triggered several minutes of confusion and panic, but in the end, the game recommenced, and the referee added eight minutes.

However, further controversy ensued when Marcel Sabitzer, one of the two players brought on, scored Bayern’s fourth in the 96th minute. This left the opposition furious and demanding action.

Read: Why Bayern Munich is planning a drastic change in transfer policy

What punishment could Bayern Munich receive for having 12 men on the pitch?

As per Sport Bild, the reigning Bundesliga champions could lose their win, in addition to a possible point deduction.

The legal and procedural rules of the DFB, paragraph 17, paragraph 4 says:

Bayern’s win could be counted as a defeat. But this is dependent on whether Freiburg decides to protest against the result. They have two days to make their case, or the current outcome will stand.

Nagelsmann’s side currently sit top of the Bundesliga, nine points clear of second-placed Borussia Dortmund. Any points deduction would open up the title race, with six games still to play.