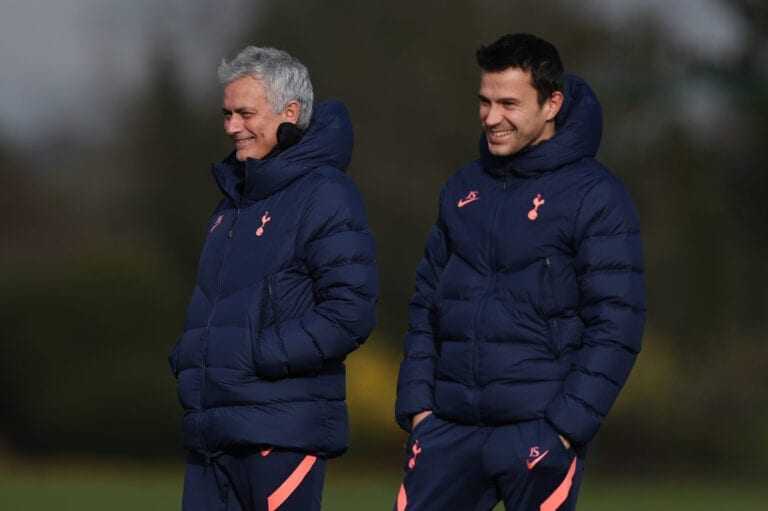 Jose Mourinho was appointed as Roma head coach yesterday from the start of the 2021/22 season.

It marks a swift return to the game for the Portuguese boss, who departed Tottenham Hotspur two weeks ago after 17 months in charge.

It is also a return to a country in which Mourinho has achieved success in the past. During his two-year spell in Italy with Inter Milan between 2008 and 2010, he won two domestic cups, two Serie A titles and the Champions League.

Following his appointment, a classic clip featuring Mourinho and his Spurs assistant Joao Sacramento has gone viral on Twitter.

The footage was from Spurs’s 2-0 victory over Manchester City last season.

City had just been awarded a penalty after the referee deemed that Hugo Lloris had fouled Raheem Sterling in the box.

VAR would subsequently overturn the decision, much to the delight of Mourinho and his assistant.

Sacramento then turns in the direction of the fourth official, motioning for a yellow card.

He then makes the same signal to Mourinho, which is followed by a hilarious moment.

All euphoria is quickly forgotten from both men as Mourinho acknowledges his assistant’s signal, slams his bottle down and charges towards the fourth official, with Sacramento following closely behind.

Check out the clip below:

Many of the replies below the original tweet recalled their classic moments involving Mourinho.

There were the usual contenders – the run to the corner flag at Old Trafford in 2004 and his famous ‘I prefer really not to speak’ quote.

Then there was his destruction of a crate of bottles after United scored a late winner against Young Boys in the Champions League.

And the time he pointed to the United badge on his coat after the Red Devils beat his former club Chelsea in 2017.

Mourinho has been doing some reminicising of his own in recent weeks over on his Instagram.

He posted a photo of him and Steven Gerrard during Chelsea’s 2-0 defeat of Liverpool in 2014 – the game that severely dented the Reds’ title challenge – and captioned it with the date and the words: ‘Ball possession’.

And the day he ran onto the Camp Nou pitch after his Inter side progressed to the Champions League final on aggregate against Barcelona in 2010: