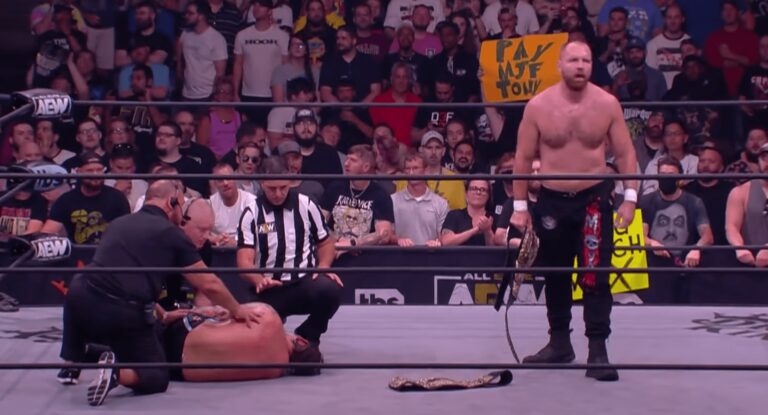 There was a huge surprise on the latest edition of AEW Dynamite as CM Punk lost his AEW World Championship against Jon Moxley in just over three minutes.

The pair were scheduled to face off for the title at AEW All Out next week. With Moxley the interim title holder, it was set to be a unification match for the main title.

However, Fightful Select reported on Wednesday that plans had changed. Moxley and Punk would have a match on Dynamite instead. Moxley was believed to be happy with the plan, and his opponent eventually agreed to it.

With the match billed as the main event, fans were expecting a high-octane matchup between the two rivals, with no idea who would win the title. They didn’t get that, but they saw something equally as intriguing.

The match began, and Moxley took control early on. However, Punk responded with several strikes of his own, and hit his opponent with a kick to the head.

However, ‘The Best in the World’ immediately went to ground after the kick, clutching his left foot.

The 36-year-old walked out with the title, whilst Punk had to be helped out of the arena by medical staff.

Why did Moxley win so quickly?

No official reason has been given for why Punk dropped his title in over three minutes. He has recently returned from injury, with this being his first televised match since he won the AEW World Championship in June.

According to Fightful Select (via Wrestling Observer), Punk is not injured, and AEW still have plans for him to take on Moxley at AEW All Out, in what will likely be a rematch for the title.

It is claimed that Moxley pitched the match that took place on Dynamite, as he wasn’t happy with the plans for AEW All Out.

That means that AEW fans can look forward to another monumental clash between two stars of the company. Hopefully, this one can last longer than three minutes.