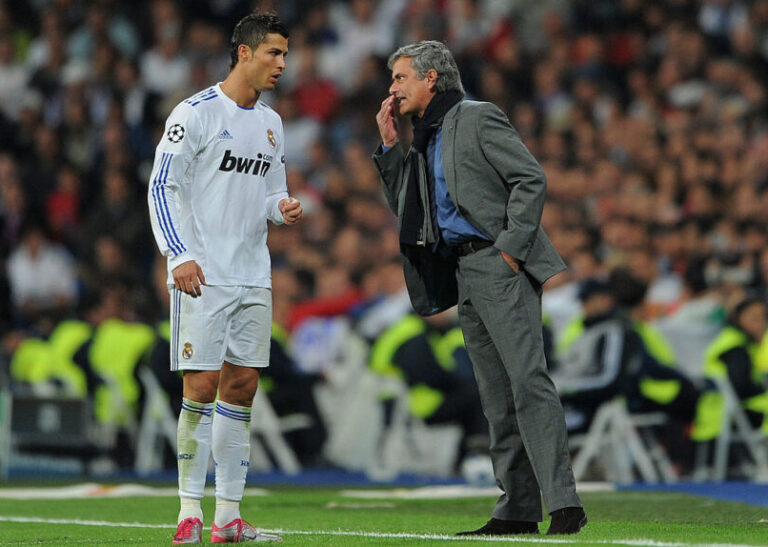 Reports from on the continent suggest that Cristiano Ronaldo could make a stunning return to Serie A, reuniting with former boss Jose Mourinho at Roma.

The Man United forward has long been the subject of speculation throughout this season. Ronaldo has given his all to keep United afloat in 2021/22. His 18 league goals and key inputs on numerous occasions just about rescued a disastrous campaign for the Old Trafford side.

This year, man United finished sixth in the league, recording their worst points total of the Premier League era. As a result, the club will undergo a rebuild with new manager Erik ten Hag. The new boss seems keen to keep Ronaldo at Old Trafford despite the rumours.

When asked whether the Portugal captain was in his plans for next season, Erik ten Hag gave a definitive response: “Of course.

“Cristiano is a magnificent footballer and a true winner, so I can’t wait to start working with him,” said the new United boss (as per The Independent).

However, even ten Hag’s assertion that he wants to keep Ronaldo does not stop the rumour mill from spinning. Recent reports have suggested an unexpected new destination for the five-time Champions League winner.

Roma may look to bring in Ronaldo to bolster their attacking options and provide support for Tammy Abraham. The Englishman led Roma with 17 league goals. Additionally, Abraham scored nine goals in the Europa Conference League as the Giallorossi won the tournament’s inaugural edition.

Some fans question whether Roma could afford to pay the Portugal legend’s weekly wage. But Ronaldo is already set for a hefty wage cut.

The Daily Mail claim that numerous players, including Cristiano Ronaldo, have a clause in their Man United contracts that can cut their salaries. This reduction would occur if United missed out on Champions League football – which they have.

Therefore, Ronaldo is already taking a pay reduction. Would he be tempted to take one in the eternal city instead?

After all, Cristiano Ronaldo and Jose Mourinho have a successful history together.

Mourinho managed the forward during his time in charge of Real Madrid. In his three-year stint in the Spanish capital, Mourinho controlled an elite attacking force.

Their 2011/12 title-winning campaign was one for the books. Although Mourinho is known for his defensive style, this Real Madrid team were prolific. Los Blancos scored an unprecedented 121 La Liga goals – breaking the record for the most scored in a Spanish topflight season.

Furthermore, they became the first La Liga side ever to reach 100 points in a single season.

Ronaldo himself had an incredible 2011/12, bagging 46 goals in 38 games. But he still did not win the golden boot, as Lionel Messi somehow finished the season with 50 league goals.

Cristiano Ronaldo, therefore, has some fond memories of working with Jose Mourinho. Will it be enough to convince him to move to Roma? He has a whole summer to consider it.

Jose Mourinho refuses to do press conference after Roma loss