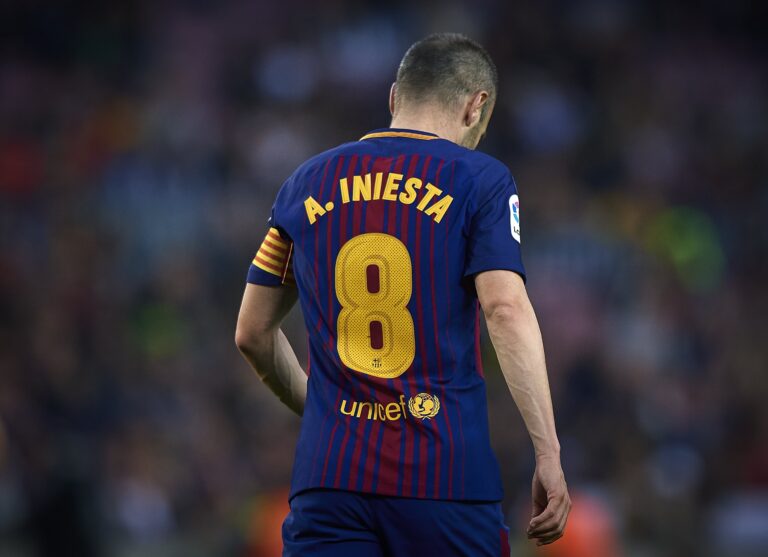 Dani Alves is set to make a fairytale return to Barcelona, five years after initially leaving the club – and he has a new shirt number.

It’s been somewhat of a whirlwind year for the Brazilian. He left his previous club Sao Paulo in September – two months after captaining his side to the gold medal at the Tokyo Olympics.

Despite signing as a free agent, the 38-year-old cannot make his second Barca debut until January. He has, however, already had his shirt number revealed.

The club announced on their official website that Dani Alves will wear shirt number eight, following in the footsteps of a host of Barcelona legends who have also donned the number.

Let’s take a look at some of those famous Barcelona players that Dani Alves will now join in wearing shirt number eight, and which names had the most signficant impact on the club:

Having joined Barca in 1998, Dutch international Phillip Cocu arguably spent the best years of his career with the club before leaving in 2004.

Cocu netted 12 goals in 36 LaLiga appearances in his first season, and remained a mainstay in central midfield.

The Dutchman also captained the club, and broke the record for the most Barca appearances by a foreign player. He won one trophy whilst at Barca – the 1998/99 LaLiga title.

Cocu later went into management, with spells at PSV Eindhoven and Fenerbahce. English football fans will also remember him for his stint with Derby County, with the Dutchman spending 16 months at the club between 2019 and 2020.

Midfielder Guillermo Amor spent much of his professional career at Barcelona in the 1980s and 1990s, having come through the famous La Masia academy.

He helped to run the academy after retirement between 2003 and 2007. He also spent time as a technical director before a short managerial stint with Adelaide, and has since returned to his youth category role at Barca.

As a player, he made over 300 league appearances for Barca, scoring 47 goals. Amor collected 37 Spain caps during that time. Amor won an incredible 17 trophies with the club, including the 1991/92 European Cup under the management of Johan Cruyff.

Hristo Stoichkov joined Barcelona at a time when LaLiga rules restricted each side to fielding only three foreign players.

When Romario joined the club in 1993, they had four foreign players on their books. Stoichkov and Romario’s strike partnership went on to play a key role in the club’s success, and left both men revered at Barca.

The Bulgarian, who was handed the number eight shirt, helped the club to win four consecutive LaLiga titles between 1991 and 1994. He won the Ballon d’Or in the latter. The forward ended his 151-game LaLiga career with a strike rate of nearly a goal every two games. There was also a European Cup in 1992.

Stoichkov then returned to the club for a brief spell between 1997 and 1998. He scored nine goals in 41 appearances in all competitions.

What is there to say about Andres Iniesta? The man that came through La Masia, established himself in the first team and stayed there. He won almost everything in the process.

Midfielders rising through the ranks today view Iniesta as an inspiration, a model for success. His skills meant he was capable of playing in wide areas and in central midfield, or even in more advanced roles.

Read: Andres Iniesta picks out the ten greatest moments from his career

The true impact of Iniesta lies not just in the stats, but the joy of watching him play football. The stats, though, are certainly something. He spent 18 years in the first team, making over 400 LaLiga appearances and winning 30 trophies. Alongside Xavi and Sergio Busquets, Iniesta was a crucial cog in the midfield that dominated world football under Pep Guardiola.