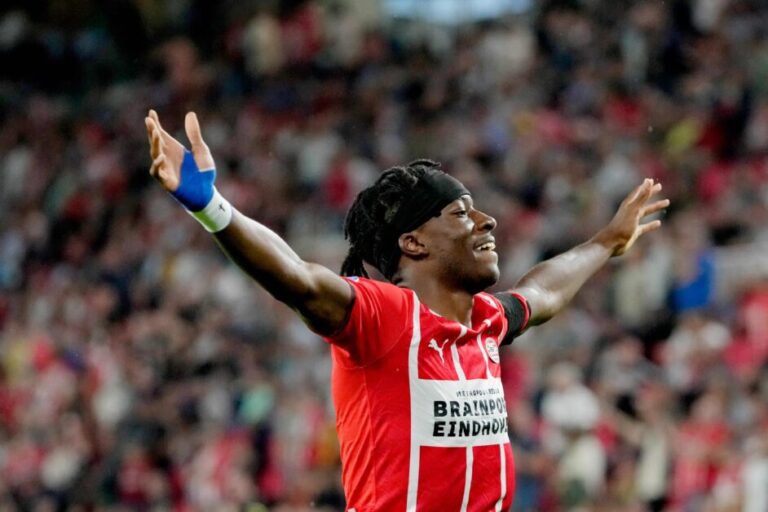 PSV Eindhoven forward Noni Madueke produced an incredible display in his side’s 5-0 victory over Vitesse Arnhem in the Eredivisie.

PSV got their title challenge back on track with the victory. They had lost their previous two games, causing them to fall behind Ajax in the race for the Eredivisie trophy. They are now five points behind their nearest rivals.

The Dutch giants opened the scoring against Vitesse through Eran Zahavi. The Israel forward smashed the ball home. That came after Mario Gotze’s shot was saved.

But the entire goalscoring chance was created by Madueke. PSV’s number 10 showed insane movement to breeze past two defenders. Some silky footwork left two more defenders helpless before the England youth international fired the ball across goal to Gotze.

Later in the first half, the 19-year-old was again at the centre of play. He played a lovely one-two with Gotze before jinxing beyond a defender and providing another slick low cross for Cody Gakpo to tap in and make the score 3-0.

Is Noni Madueke England’s next debutant?

One man that is sure to have been impressed with Madueke’s display is England boss Gareth Southgate.

The 19-year-old is one of the nation’s star prospects. In the summer, he was named in the squad for England’s U21 European Championship campaign, making his debut during a group stage defeat to Portugal.

Read: Declan Rice explains what England could have done differently in Euro 2020 final

At the age of 16, Madueke made the bold decision to leave the Tottenham Hotspur academy to move to PSV in search of regular first-team football. He made his senior debut for the club in January 2020.

Last season, he netted nine goals in 34 appearances in all competition. He has six goals in 18 games in this campaign.

Madueke told The Sun in August: “You never know how football goes. I try to take every day as it comes. My bread and butter is my club.

“If I’m winning games with my club, if I could be at the [Qatar] World Cup in 15 months, it would be great.

“There’s been no contact at the moment from [England]. The time for those decisions to be made I don’t think is now.”

If the young forward continues his impressive displays, that decision may well be an easy one for Southgate and co.