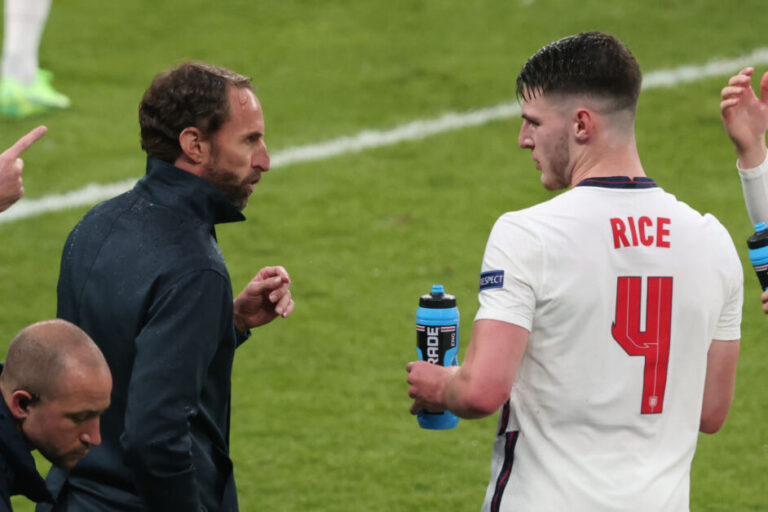 Declan Rice has revealed what he believes England could have done differently during their Euro 2020 final defeat to Italy.

The West Ham man featured in the starling lineup in one of the biggest games in English history. After an excellent run in the competition, just one match separated England from their first-ever European Championship.

They could not have started any better. It took just 116 seconds for Luke Shaw to slot home a fantastic finish to send the country into raptures. But that, arguably, could have been the worst thing to happen.

They spent the following 65 minutes desperately attempting to fend off a relentless Italian side. But in the end, the former champions broke them down. Leonardo Bonucci equalised in the second half, and Italy took over. They dominated the rest of the fixture, but couldn’t find the all-important winner.

With neither side able to break the deadlock, the penalty shootout began. Jordan Pickford made a heroic save from Jorginho. But Marcus Rashford, Bukayo Saka and Jadon Sancho could not convert their penalties for England, meaning it was Italy who would go on to lift the trophy.

The result devastated England supporters. But they still took some solace in how well their team had performed throughout the tournament.

Declan Rice featured on an episode of The Overlap with Gary Neville and opened up to the United legend over a game of snooker. He admitted that losing the biggest game of his career was devastating.

Rice revealed: “The lowest point of my career without a doubt was losing the Euro 2020 final. That’s the lowest that I’ve ever felt in football. It was the whole experience. Obviously, we’d done so well throughout the whole summer. As players and lads, we thought it was ours to lose.”

He also revealed the one aspect of the game he believed England could have done better.

Rice added: “As players, we probably could have taken a bit more responsibility and had the ball a little bit more.

“We had an opportunity to go 2-0 up. Everybody was up for it and dead aggressive. We were going in strong winning headers, winning the second ball. But by the last ten minutes of the first half, we started dropping back a little bit.

“For 35 minutes, we stopped them from getting into their zone of passing the ball. But then the space opened up.

“At the end of the half, we were in a good position. We felt we could stay compact, but our heads dropped when they scored the goal, and it’s hard to get back into it after that. But that’s when you need to go again, really. And we didn’t do that.”

Southgate’s men will have another opportunity to win silverware during the World Cup in Qatar. Rice will be hoping to play a leading role alongside his teammates in helping England to progress as far as possible – and potentially even lift the trophy.