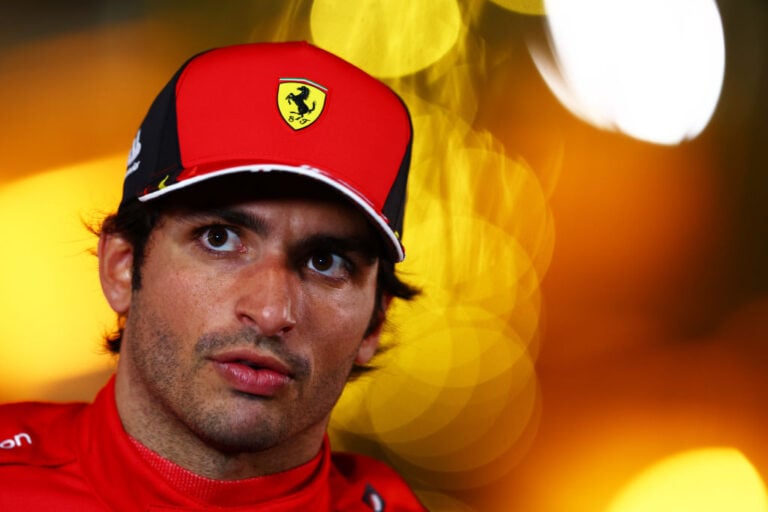 Carlos Sainz has outlined a long-term concern regarding the current set of F1 cars.

The Ferrari driver was speaking ahead of this weekend’s Spanish Grand Prix – his home race. Sainz will hope for a strong showing at the Circuit de Catalunya to keep his season heading in the right direction.

So far, 2022 has been a mixed year for Sainz. He started strongly with back-to-back podiums in Bahrain and Saudi Arabia. However, the next two races were highly challenging.

He retired early in the Australian Grand Prix, then a lap one incident with McLaren’s Daniel Ricciardo forced another retirement at Imola.

Mercifully, Sainz bounced back at Formula 1’s inaugural Miami Grand Prix. After qualifying an impressive second on the grid, the Spaniard finished ahead of Sergio Perez’s Red Bull to take third.

Despite having three podiums, Sainz is still playing second fiddle to teammate Charles Leclerc. The Monegasque ace has beaten Sainz at every round so far this year, whilst also having a 5-0 head-to-head qualifying record against him too. To make matters worse, Sainz has half the points that Leclerc has accumulated so far this year.

Ferrari quickly became one of the contenders this season in a year that saw the introduction of a host of technical rule changes.

The iconic Italian outfit are back where they belong in 2022 – challenging for and winning Grand Prix. They achieved this through successfully adapting to the new rules for this season.

With the intention of improving overtaking, F1 decided to make regulation changes that permitted the use of ‘ground effect’ aero, rather than over-car downforce.

In essence, the car’s aerodynamics are designed to force air underneath the car. This sucks the vehicle down to the tarmac, causing downforce and grip.

Unfortunately, a side effect that many teams saw in testing – and still suffer from in some cases – is ‘porpoising’. At high speeds, fans saw the cars bouncing as they hurtled down straights.

Ground effect aero was the root cause; as speed increased, more air was forced under the car, sucking it closer to the ground. The car would get too close to the ground at a certain point, stalling the downforce.

This stalled downforce would suddenly reduce the load on the car – momentarily raising ride height. As a result, air could begin rushing underneath the car again. This causes an increase in ground effect downforce and sucks the car back down toward the track again. And thus repeats the cycle.

‘Porpoising’ is an issue that numerous teams have struggled to solve. Ferrari have been relatively successful in preventing the sensation but still ‘porpoise’ occasionally.

The Italian team modified the side of their challenger’s floor, creating side grooves that direct enough airflow from going under the car to prevent severe bouncing.

Despite this, their driver, Carlos Sainz, has issues with the amount of ‘porpoising’ in F1.

Speaking to Autosport about the upcoming Monaco Grand Prix, which follows the Spanish race, the Ferrari driver says he expects a tricky time.

“I think it’s going to be a big challenge [at Monaco],” he said. “I think already the kerbs in Miami felt proper aggressive in these cars. There’s been a few bumps in Imola that were quite hard on the body.”

Sainz then outlined his worry about the drivers’ health because of the stiffer suspension and ‘porpoising’.

“We need to think, as drivers and F1, how much of a toll a driver should be paying for his back and his health in an F1 career with this kind of car philosophy? I think we need to open the debate more than anything.

“I think the regulations are great. They’re doing exactly what we need for racing. But do we need to run as stiff for our necks and back as we are having to run lately, with this car mass?

“For me, it’s more a philosophical question that I put out there. Maybe for F1 and everyone to rethink about how much the driver needs to actually pay a price in his career with his health, in order to combat this.”

“I’m already feeling it,” he continued. “I don’t need expert advice to know that 10 years like this is going to be tough, and you’re going to need to work a lot in mobility, flexibility. I’m going to need to invest in health, overall body health.”

Carlos Sainz is not the only F1 driver battling pain from ‘porpoising’. George Russell, whose Mercedes car is one of the worst for the effect, has complained of chest and back pain in the past.