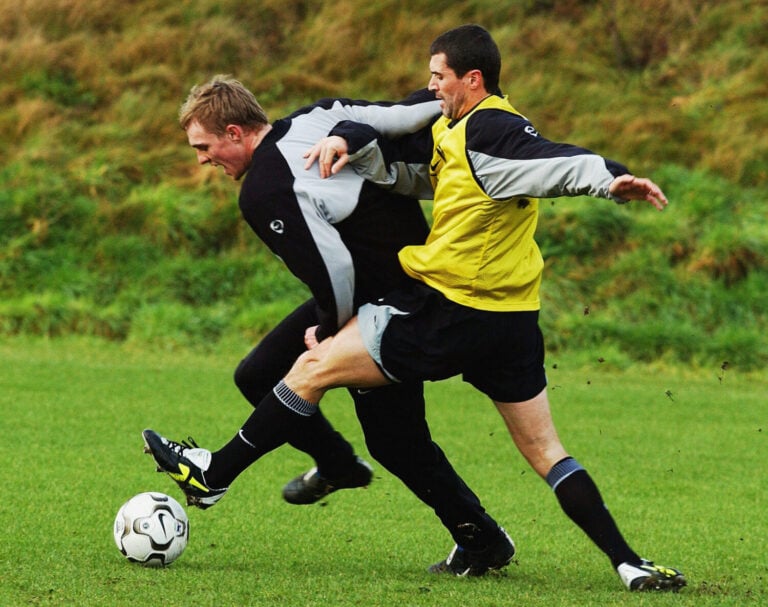 Roy Keane on the whole, seems like a pretty terrifying person and someone you probably don’t want to get on the wrong side of.

That fearsome reputation has stuck with him during his punditry career, with the ex-United man’s no-nonsense attitude leading to regular clashes with his co-hosts.

Thanks to that we rarely hear about the ‘softer’ side to Roy Keane, who is still undoubtedly one of the greatest captains in Premier League history.

Darren Fletcher has shed some light on those leadership qualities, sharing an incredible compliment the Irishman paid him when the pair played alongside each other.

The 36-year-old Scotsman was talking about his three biggest influences, telling the UTD Podcast that Keane was one of them.

“My dad, Sir Alex Ferguson and Roy Keane are the three biggest influences on my career,” Fletcher said.

“They are the people who helped me. The great thing about Roy Keane is that he says 10 things to you. One of them is classic Roy Keane where he has a go at you, lets you know and is really harsh on you.”

“The other nine times, he gives you a compliment, but nobody hears about that or wants to remember that because it is not a good story to tell. But that is the way I remember Roy Keane.

“Roy Keane was fantastic with me. Walking off the pitch beside Roy Keane and him saying to you, ‘fantastic today son, I could play for another 10 years with you beside me in midfield.’

“Nobody hears that and it made me feel like a million dollars.

“The confidence I got from those words from Roy Keane massively outweighed the handful of times where he had a go at me and rightly so, because the levels or my standards were not that of a Manchester United player coming through, which is completely normal.”

Keane’s positive influence on Fletcher clearly paid off, as he became something of a cult hero at Old Trafford.